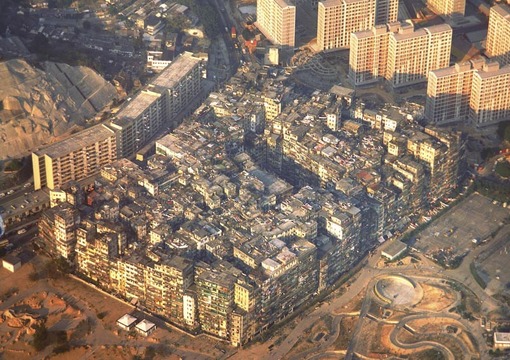 (Via DirJournal.) Here’s material for a novel. Kowloon Walled City, once a military installation in Hong Kong. After World War II, the Walled City descended into a tightly packed and ungoverned zone, a pirate enclave. It was demolished in 1994, and a park now exists in its place.

By the end of 1970s Walled City began to grow. Square buildings folded up into one another as thousands of modifications were made, virtually none by architects or engineers, until the entire City became monolithic. Labyrinthine corridors ran through the City, some former streets (at the ground level, and often clogged up with refuse), and some running through upper floors, through and between buildings. The streets were illuminated by fluorescent lights, as sunlight rarely reached the lower levels. There were only two rules for construction: electricity had to be provided to avoid fire, and the buildings could be no more than fourteen stories high, because of the nearby airport. Eight municipal pipes provided water to the entire structure (although more could have come from wells). By the early 1980s, Kowloon Walled City had an estimated population of 35,000. The City was notorious for its excess of brothels, casinos, opium dens, cocaine parlours, food courts serving dog meat, and secret factories.