A Couple Of Reviews 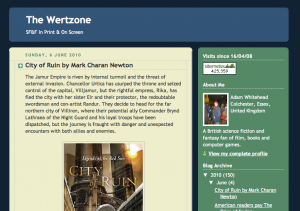 Newton successfully achieves a feeling here of a vast history stretching back a quarter-million years with successive waves of civilisations rising and falling until the present day, whilst simultaneously expanding the scope of the world and story to a more cosmic level…

… an excellent fantasy novel fusing elements of the New Weird and traditional epic fantasy into a satisfying whole.

I’m particularly pleased he spotted some of the references to other books, too. And I just noticed that the Wertzone is fast approaching half a million hits for his site. This interweb is quite big, isn’t it?

Sandy Auden reviewed City of Ruin for SFX magazine. Here’s some behind the scenes stuff: magazine reviews completely depend upon the tastes (and often personality) of the person who ends up getting the book for review, rather than the magazine as one entity, so they can be a bit of pot luck, and it’s sometimes fun seeing who reviews what book, especially if you know the names involved. So for openness I should say that I’ve known Sandy for a couple of years now, have shared a drink or two with her on the convention circuit (she interviewed me recently at the SFX Weekender, in fact) and despite that, she didn’t dig it as much as I’d have hoped – a very honest 3.5 stars out of 5. (Which just goes to show how lovely she is.)

A deft melding of murder mystery, gang warfare, corrupt politics and full-blown war… it’s the characters that make this story truly accessible. Everyone is carefully crafted with their own foibles, histories and motivations. They get romantic, get angry, bleed as they move through their lives, facing their various hardships. It feels like an immense commitment to take onboard all the details of their individual lives and their culture, but it’s ultimately a rewarding experience.

Share this Story
Previous: Wildwood
Next: City Of Ruin – The Playlist