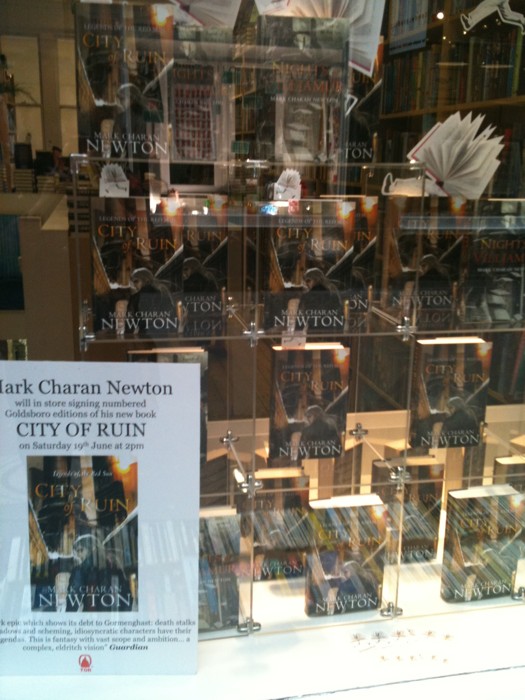 I went to Goldsboro Books on Saturday to sign limited edition, numbered copies of City of Ruin. Check out the mighty window display. It was a very relaxed affair, which is how it goes sometimes, but it was lovely to meet those who managed to swing by, and I’m always interested who’s at the other end of these blog posts. After that, I cracked on with signing the rest of the 150 copies, nattered to the lovely David and the gang at the store (and Chloe from Macmillan), and we all drank some wine. More bookstores should offer wine.

Young Sam Sykes has made a very interesting blog post on the issues of new writers being compared with established writers.

What we shouldn’t be doing is treating the atmosphere like an episode of Highlander, in which there can be only one author and everyone who is not him is dirt. Saying “this voice does not work for me” is fine. Saying “this voice does not work for me because this is not Joe Abercrombie’s voice” is not. That’s not a criticism. That’s just unfair. It’s unfair to an author because it’s basically saying that the only way he can succeed is if he’s someone entirely different. It’s unfair to a curious reader because all it does is observe that said author is not someone he never claimed to be. It’s unfair to the readership at large because it cultivates an air that is hostile to authors who are not as established and readers who are not following the established names.

And, in the comments, Scott Lynch echoes this concern:

It’s an especially unhelpful comparison when it’s “[debut author in their 20s] is no [experienced author who’s been doing this for years or decades].” Christ, find some relevant comparisons or cut the poor bastards (or maybe that should be ‘us poor bastards’) some due slack.

You should read the rest of the post, since I very much agree with these sentiments. Having received such criticism in the past, I can tell you that it’s very frustrating. We live in a culture where people need to make quick comparisons, and that’s fine in the world of marketing, or to shift units, but feeling cheated because these are not the authors you’re looking for is not a valid statement on the literature. Tell me why I’m rubbish for my own reasons, please.