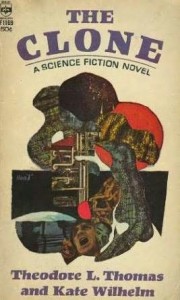 Give the recent furore over cloned meat entering the food chain, I thought I’d share this comprehensive study into “Risks and consequences of the introduction of cloned animals for food production”, by the Testbiotech Institute for Independent Impact Assessment in Biotechnology. If you’ve not the time to wade through it all, here is the summary:

Animal welfare: Many adverse health effects are reported in cloned animals and their surrogate mothers.[1] Further, higher productivity in farm animals is correlated with shrinking biological diversity, shorter lifespan and higher incidence of damage to health. It is likely that cloning will foster this development.
Transparency and traceability: There is some likelihood that genetic material derived from cloning farm animals (such as semen and embryos) has already reached the European market on the level of farm production. There is a high risk that this material is disseminated throughout the populations without any transparency and traceability.
Farm production: Patents on cloned animals and their offspring will enforce new dependencies for farmers and breeders, and the process of concentration in the animal breeding business will be fostered. This can also have an impact on biological biodiversity in farm animals.
Food production: If the products from cloned animals are introduced into the food market, high costs for labelling and segregation can arise. Consumers will need a high degree of transparency to enable them to make well-founded choices.
Food safety and food market: Further investigations concerning food safety (e.g. different milk composition) are needed. In the light of the variety of factors impacting the outcome of cloning and the broad range of observed effects, health risks cannot be excluded for the time being. Consumers risk being turned into some ‘end of pipe hostage’, not unlike the way that they are already caught by the usage of genetically engineered plants. Opinion polls show subs- tantial consumer rejection[2].
Future developments: Cloning of animals for food production could pave a way to the introduction of further biotechnologies for engineering in livestock.

I’m more interested in what happens behind the scenes. Given the shocking subterfuge often used by governments and corporations concerning GM crops, it’s worth waiting for more information to filter through on the background of the cloned meat industry and the firms involved – even though it’s not the same as GM. The fact that European laws have already been broken doesn’t fill me with hope of this being a transparent enterprise.

Though it isn’t the same industry, my biggest problem with GM foods was not with the technology, which can in theory be applied with many benefits across a broad spectrum of possibilities (sucking up pollutants from contaminated soil, for example). No, it’s the patents – and the fact that corporations could end up owning the foodchain (and a whole host of other technical issues, which I won’t bore you with). It’s worth saying that the “benefits” of cloned meat, if any, are not being forced down our throats (forgive the pun) as intensively as the propaganda surrounding GM crops – perhaps because the story broke in the New York Times. Essentially, this is at the core not the same debate, even though public discussions will share the “Frankenstein foods” tag.

I’m still waiting for a Ecologist vs Monsanto moment (an occasion worthy of a quick Google) to get the full dirt on some of the major firms involved, and now the story is making headlines, I hope it won’t be too long.