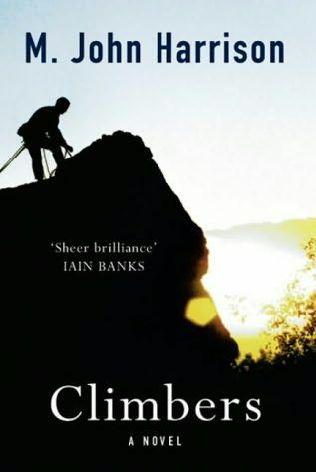 Not a review, this – just some impressions. First I’ll be upfront: I’m a big fan of Harrison’s work. Nearly everything that he’s written is of superior quality. His descriptive power is second-to-none, and he can distinguish any environment with remarkable power. This is especially noticeable in Climbers, his non-SFF novel.

It’s the story of Mike, his recovery from a failed marriage, and his integration into the rock climbing community over the Yorkshire Moors. The culture of climbing, and the people involved, are discussed at great length – observing their experiences at the rock-face and in cafes and pubs. The story is presented as various reminiscences for the most part, so don’t read this expecting a simple plotted narrative. Like memory, it jumps around. These collections of images and stories build a picture of what is, ultimately, an obsession with climbing, the perfect climb, and how everything else in life seems to fade away amidst this lifelong yearning. I personally didn’t feel these collections provided the emergent properties of Light; which is to say that the collections remained mere observations, and you drew the weight of emotions from them yourself (this is perhaps a technique gleaned from Katherine Mansfield, of whom Harrison is a noted fan). The book was beautiful, that’s for sure. The depiction of the landscape is so accurate and vivid, and the prose… well it’s Harrison on perfect form.

What I find especially fascinating is observing how Harrison approaches his non-SFF novel. Much of the same level of alienation seems present; as does his way of making the texture everyday life seem utterly bizarre. Some of the rock formations which the characters tackled might well have been on another planet. I’d love to see him handle urban environments in a similar way – it would no doubt be up there with Iain Sinclair and J.G. Ballard.

Afterwards, I couldn’t help but wonder: how would other genre writers cope with writing mainstream fiction? Would the themes and nuances be the same? Do we rely too much on worldbuilding and wow-factor to carry us through? (Perhaps this is projecting my own concerns.)

Share this Story
Previous: Meatspace
Next: Nights of Villjamur – Audio