A Catch-Up / Other Business

I must admit, it was rather nice to be away from the internet for a week. As you can see in the previous post, the weather and landscape and cottage were splendid. Highlights included rescuing a pipistrel bat, deserted beaches on the Isle of Bute, and the incredible Mount Stuart. And also straying into The Old Bookshelf, a charming little second hand book store, which boasted a tremendous SF and Fantasy section – so much so, that I was forced to strike up a conversation with the owners. It just so happened that this was the store local to Lisa Tuttle and Colin Murray, who would occasionally drop off stock. This solved the mystery of why there was such a good supply of genre books. 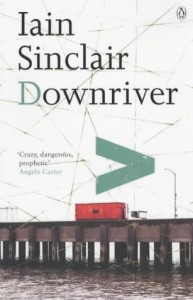 I got only a little reading done. Firstly, I confess to abandoning the splendid Downriver, by Iain Sinclair. It was too rich, too treacly a prose for me to cope with at the moment. I’ll maybe come back to it at some point in the future, but I made it halfway through. The prose was sublime, but it was quite literally pages and pages of (occasionally abstract and omniscient) description. Sometimes my mood would suit such a read; being tucked away in a rural cottage did not generate such a mood. Or maybe it was the whisky.

The book I did finish was Six Degrees, something I’d been meaning to read for ages. I enjoyed this, but the content was a little too similar throughout (depressingly so). It was also just a fraction too accessible, too casual a read, but that’s not necessarily a bad thing. 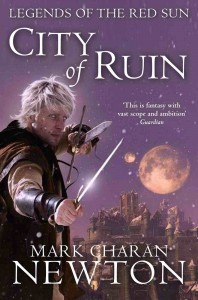 A few interesting comments came in response to the mass market cover art for City of Ruin.

“But the Harlequin dude must go. It’s not as bad as the infamous Patrick Rothfuss gay cover”

“It looks absolutely dreadful, almost like a Harlequin Romance mated with and Urban Fantasy novel and got spat out in the regular fantasy section…” [In the comments]

Upon seeing an attractive man on the cover of a novel, rather than a hot woman, epic fantasy fans (men, usually) seem get most annoyed. Why is this? I’m not against people simply not liking the design, the quality of the art, the colours, featuring characters in general, whatever. But do men really loathe seeing fit men on covers, only to say bugger all upon seeing attractive women on books? It’s not as though this character in particular was dressed for Men’s Health magazine – he’s kitted out for war, and just happens to be fairly handsome. Brynd is a good-looking guy, and I’m not going to insist the cover features some swamp donkey that not even the tide would take out.

And contrary to a couple of other curious comments – yes, I genuinely do like that cover art. I would let people know if I didn’t.

A final note of congratulations to China Miéville for jointly winning the Hugo for The City & The City (which I sort-of reviewed in March last year). Thoroughly well-deserved.

Share this Story
Previous: What We Did on Our Holidays
Next: Blair Cancels Book Signing