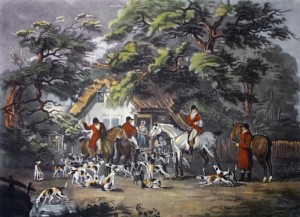 It’s not a recent news article (two weeks old), and certainly not a hot topic right now; but I’m glad to see some sense is drifting into the odd Tory MP:

The election of a new generation of Conservative MPs opposed to bloodsports is likely to block attempts to repeal the ban on foxhunting with hounds, according to members of the latest Commons intake.

A full vote to legalise the pursuit of wild mammals with dogs is therefore unlikely to be held during this parliament because there is insufficient support, animal rights campaigners maintain. Figures on the parliamentary arithmetic collected by the League Against Cruel Sports are supported by soundings taken by some anti-hunting Tory MPs.

I think what annoys me the most about people who argue in favour of fox hunting is when they claim, as David Cameron did earlier this year:

The point is the fox population has to be controlled.

It is – as any ecologist would tell you – utter nonsense to think that hunting foxes in this way will have any impact.

Rather than distort reality, I would have more time for hunt supporters if they at least have the decency to say that they love trawling across the countryside killing things simply because they enjoy seeing animals in pain.

In that particular article, David Cameron implied that all farmers were on his side, but perhaps he neglected those farmers who disagree (they don’t have the ban in Ireland):

[Farmers Against Foxhunting and Trespass] maintain that foxhunters seek to keep themselves in business… and land… at someone else’s expense – namely the farmer,” the group said. “The hunts demand and expect that farmers should supply free of charge to them the most expensive part of their destructive pastime.”

It said the “so-called hunting fraternity” was composed of “vandals, law-breakers, and serial trespassers”.

“Foxhunters have no respect for farmers… for their land, crops, or livelihoods. They have trampled on our rights, land, and on the dignity of farmers, for decades.”

Is it simply about wealthy landowners trying to assert dominance? A note on historical context: the structure of the countryside has historically been about the dominance of needs the wealthy against the poor. The guilty secret of many large estates is that of the brutal clearance of the poor in order to make way for the likes of Capability Brown to craft his beautiful landscape gardens.

In Liberty Against the Law, Christopher Hill tells the story of the redistribution of land and wealth from rural labourers to the landed classes between the 16th and 18th centuries, and the rack-renting, eviction and persecution of the poor. For landless labourers, he says, the termination of rights to common land “meant the difference between a viable life and starvation”. Many died in the famines of the 1590s, 1620s and 1640s. Many more – 80,000 in the early 17th century, according to the historian Peter Clark – became vagabonds whose wandering put them on the wrong side of the law. They were branded, flogged back to their parishes, press-ganged by the navy and the merchant marine, or forced into industries whose conditions and wage rates were “little better than slavery”.

You won’t find that on a National Trust plaque.

Share this Story
Previous: The Big Society Decide To Hold A Meeting
Next: Bestario – Fernando Vincente