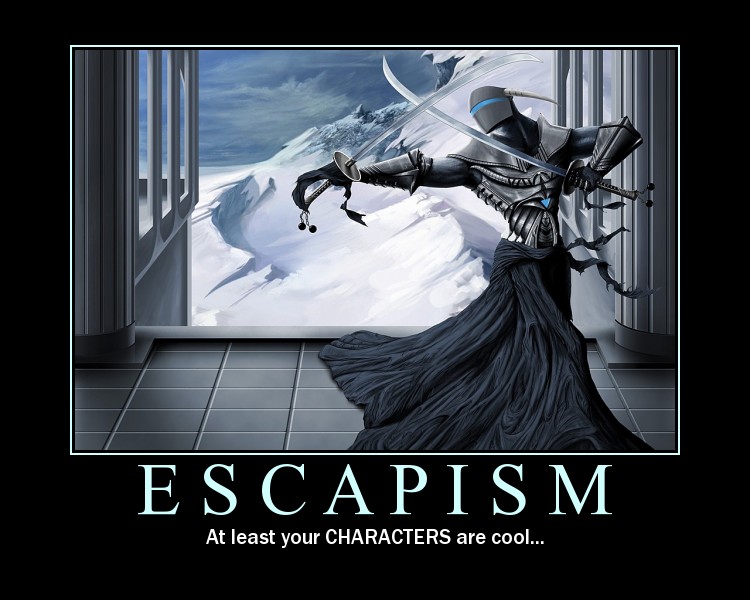 An interesting debate in the Guardian on questioning whether or not fantasy can tell the truth, but it’s the notions of escapism that repeatedly crop up in such debates:

There is nothing wrong with escaping reality now and again. Like a well brewed ale, or a good malt whisky, a finely crafted escapist fantasy can be a thing of joy and beauty. But while the occasional tipple can be a good thing, most of us recognise that a bottle of Jameson’s a night is unhealthy for body, mind and soul.

An unfiltered diet of escapist fantasy blockbusters can be similarly unhealthy. As master anti-fantasist M John Harrison expresses it in his essay The Profession of Science Fiction while discussing the appeal of fantasy to young children terrified by adult life, “Many fantasy and SF readers are living out a prolonged childhood in which they retain that terror and erect – in collusion with professional writers who themselves often began as teenage daydreamers – powerful defences against it.”

And in the comments, the rather dated line (in internet years): “I think it’s undignified to read for the purposes of escape.”

There’s a whiff of the teenage rebel about these sentiments and, I’ll confess, when I was a much younger wannabe (unpublished) writer, for a few months I was all Hell Yeah and Fuck You to the Establishment (the Establishment being escapist fiction/commercial publishing). Then I came to realise that I’ve never quite understood the argument that reading for escape is undignified. And, as one of the comments states:

My natural reaction is to say, “I think it’s undignified to have sex in a bouncy castle, but it’s fun and I’m not going to stop just because you disapprove, sir.”

In the same way I’ll watch “Singin’ in the Rain” when I feel like it, and to hell with anyone who thinks that’s unhealthy and I should be spending my time watching Citizen Kane.

Here are a couple of issues I have with the dismissal of escapism. Firstly I would question: well, what exactly are readers escaping from, an Objectively existing external world? (The Objectivist undertones concern me.) Secondly I’d want to know, why would one do anything at all if it isn’t to escape/deviate from a given path in order to discover something else? So I would say that to read ‘to better oneself’ (the often opposing argument to escapism) is still actually reading for escapist pleasure, albeit a different pleasure and a different form of escapism (from oneself?).

Perhaps people might simply mean that reading for escapism means that it’s bad to switch off. It’s unhealthy for the mind, it’s lazy, or something like that. Without wanting to create a straw man of an argument, I remember reading someone on a blog or a message board years ago saying that they were serving on the front line in a war-zone, and reading for pleasure was all that helped them get to sleep at night. Perhaps, from the comfort of our own bedrooms, we can preach about the negatives of escapism – while we’ve currently nothing in our lives from which to escape. Escapism as a form of liberation seems highly dignified in some circumstances.

As far as fantasy is concerned, these aren’t the truths we’re looking for.