Posted by: Mark Newton in my books, writing & publishing 21 Comments

Someone asked a little while ago about whether or not I could show some screenshots of Scrivener, which is a writing tool I’ve been banging on about for ages. It’s a great piece of kit and has changed the way I write. I was skeptical at first – how could a bit of software change that? – but it’s helped me plan in more detail and structure my novels. With all the notes to hand, in a very simple-to-use way, I’d say it’s helped me just relax into the writing each night.

So here are a few quick screen grabs, which I’ve taken from the forthcoming The Book of Transformations. Hopefully there’s nothing here that gives away any secrets – it’s just mainly research, and a good chunk of this sort of thing never makes it into the novel anyway. I’m just revealing all to you – because I’m that kind of guy. 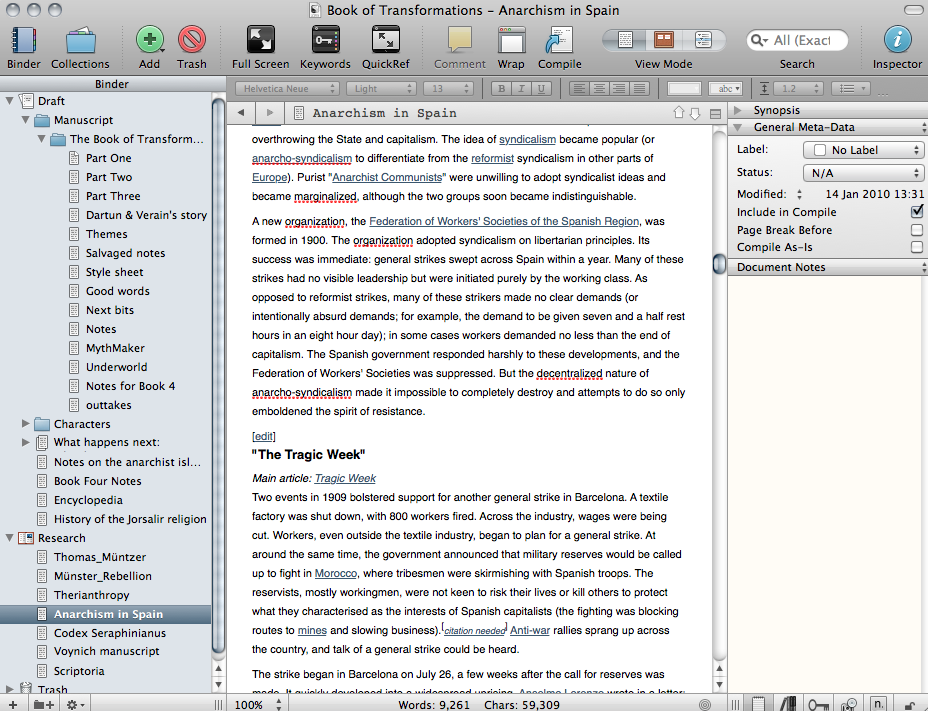 As you can see, there’s a sidebar and a central writing column. I tend to have loads of boxes for parts of the manuscript as well as the bits of research to go alongside that. You can put anything you like in these, not just text but you can cut and paste web pages (in case you ever go offline), images, the full works. This is great when I email myself with notes that I can just pop in without having to worry about formatting, compatibility and so on. A lot of the sections end up looking messy, but I’m fine with that. 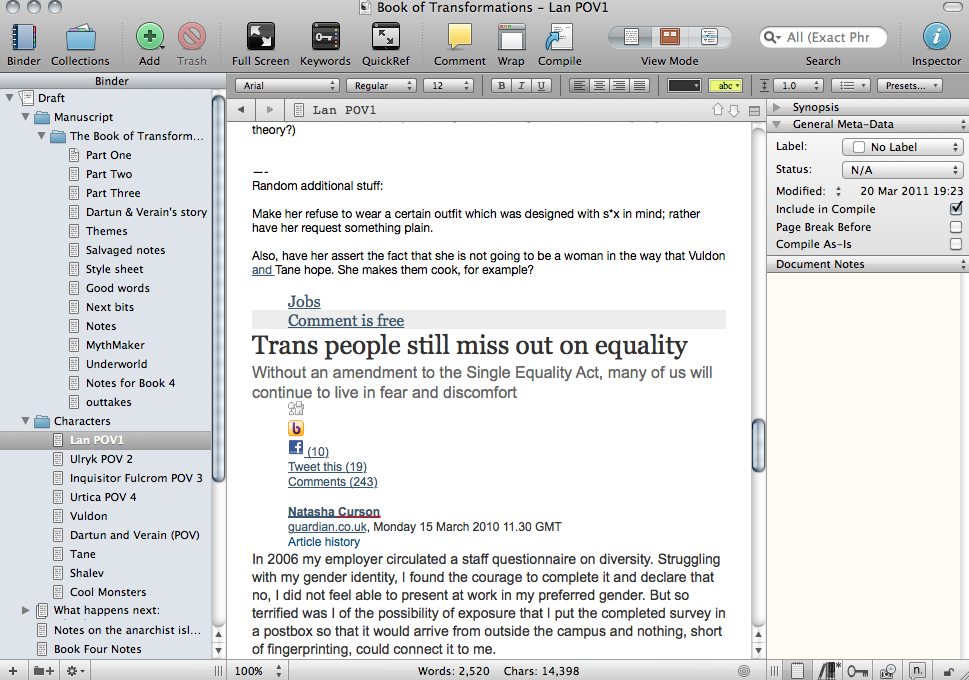 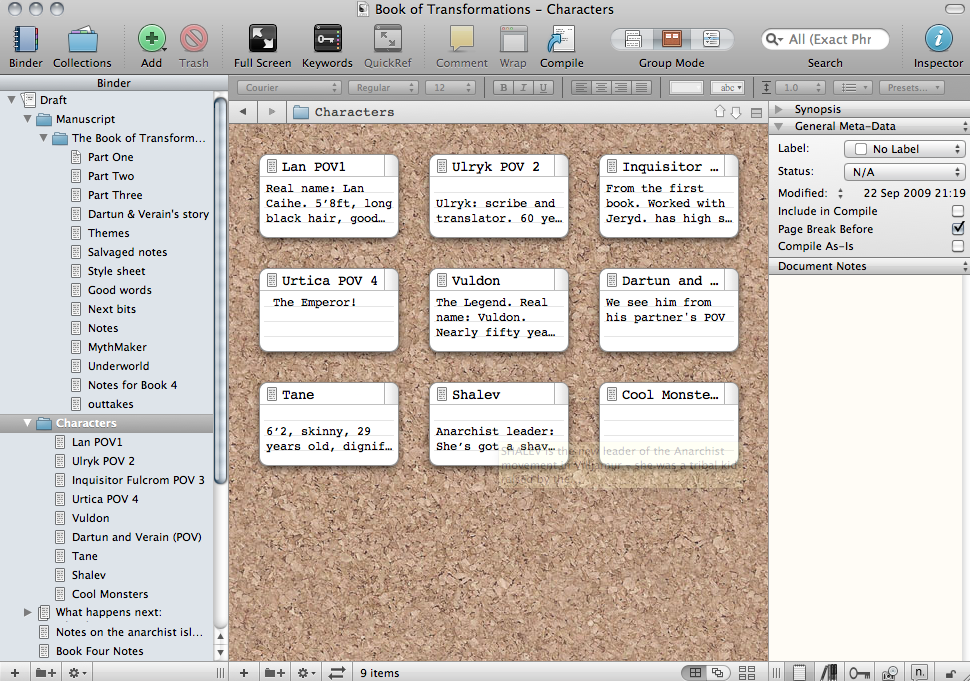 I’ve never really got to grips with the cork-board function – in fact, there are dozens of functions I’ve not yet used. But that’s all right – the software doesn’t force you to use these things. (It’s not designed by Microsoft.) 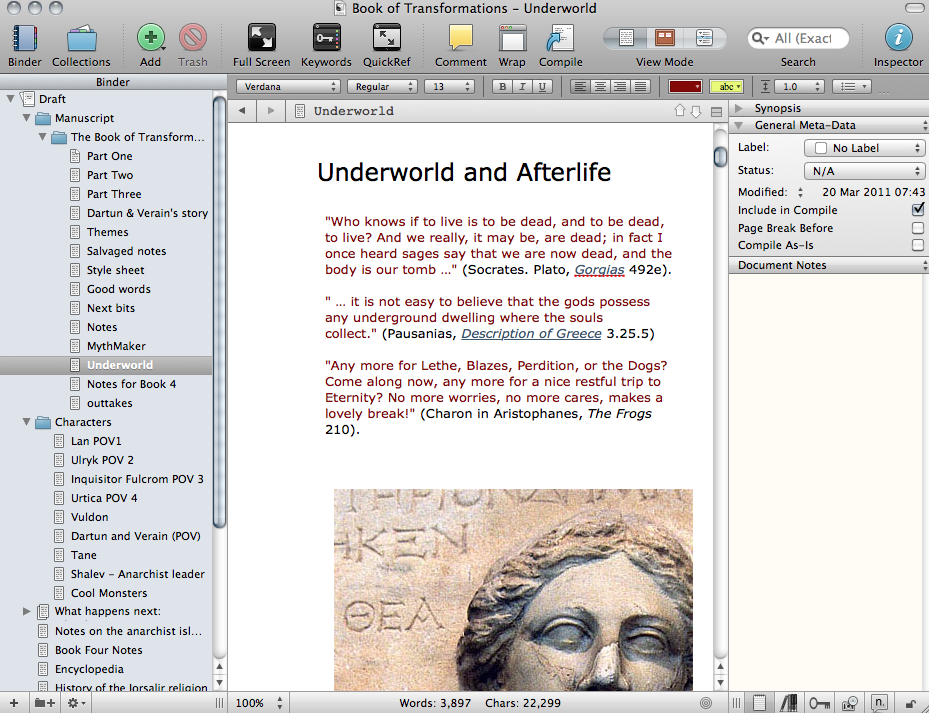 And, the coolest feature, is the one where you can knock-back the rest of your desktop, even the rest of the programme, and just have a simple page on a dark background. 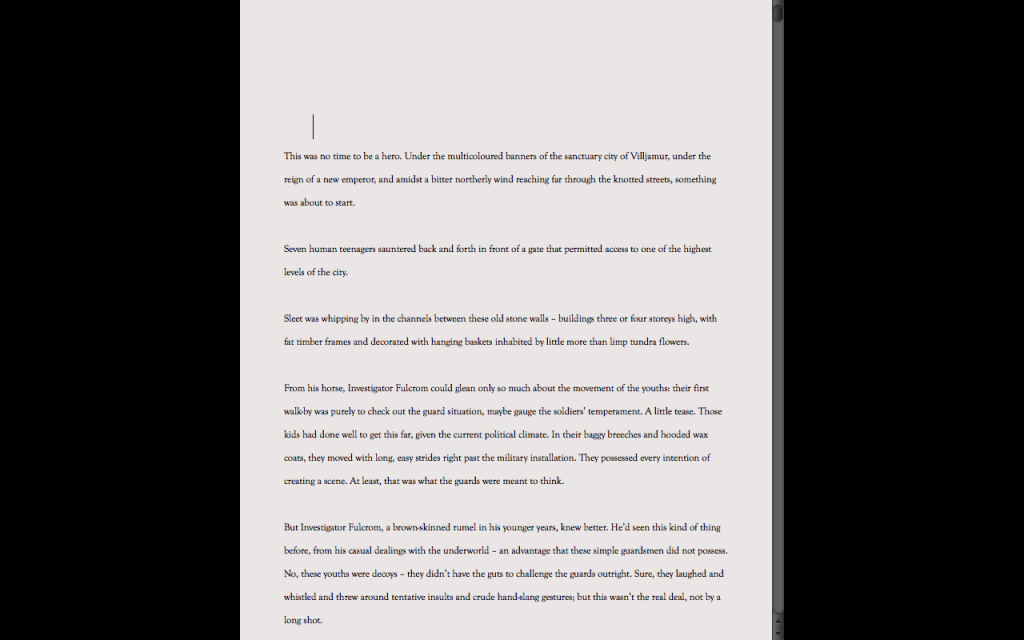 What it’s done is help me categorise and put order into the way I do things, without it ever seeming to be an irritation or a chore. It’s allowed me to move parts of the book around with ease, to drop bits in and take things out, to guarantee important notes are addressed rather than forgotten.

I know I’ve hardly used half of the features. In the current version there’s all sorts of ways of formatting your manuscript – from novels to audio scripts – so this really has been designed with writers in mind. (It’s not a word-processor, though, it’s a writing tool. I usually tart up the final draft separate to this.) You get better at using it as well – I’m using it to plan the book I’m writing after the Red Sun series, and I’m utilising far more of the available functions. (Hopefully, after a year of planning this book on the side, using Scrivener, I’ll have something far more dense and complex than the current series could ever achieve with a collection of shitty Word documents.)

So there you go. Have I sold it to you? Does anyone else use other writing software which they’d recommend? Should be said that, I think Scrivener is only available for the Mac at the moment.

Share this Story
Previous: Recent Reading
Next: Liam Bailey – It’s Not The Same