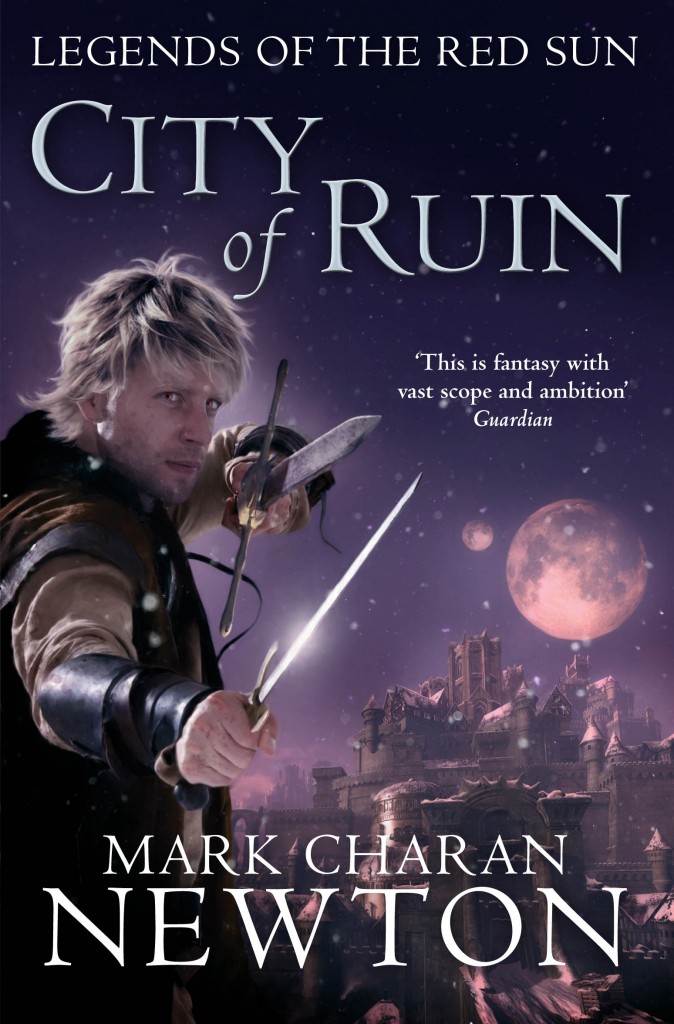 First up, there’s a review of City of Ruin (because it’s out in June in the US in trade paperback, the UK in mass market paperback), over at Strange Horizons. I link to it because it’s a very honest review, not because it’s full of praise (which it is not); and also because it contains a level of thoroughness that is splendid to receive from time to time.

City of Ruin is not a complete success. There are missteps, and some of them manage to damage the overall experience. There are, also, moments of brilliance. Though they share much of their framework, City of Ruin is a far bolder novel than Nights of Villjamur, and both its highs and the lows are magnified compared to that earlier work. If, in his upcoming The Book of Transformations, Newton can solve the problems displayed here—some disjointed elements and an often heavy hand—it’s not hard to imagine him penning the masterpiece he’s been aiming for before the conclusion of the Legends of the Red Sun quartet.

In other news, I’ve added my name to a list of 85 authors who have complained to the BBC:

The BBC has been attacked for its “sneering coverage” of genre fiction during a World Book Night prgramme. The 85 signatories in a letter to Mark Thompson, the director general of the BBC, range from Gold Dagger-nominated crime authors such as SJ Bolton, writers of children’s fiction such as Debi Gliori, as well as many fantasy, science fiction and horror authors – from Iain Banks to Michael Moorcock.

And entirely unrelated, since it’s about non-fiction, this blog, Treasure Islands, is an excellent example of how the author has made me want to buy their book by their blogging. Sure the book itself sounds fascinating, but it is superb how the author, Nicholas Shaxson, has stood on his soapbox and shouted into the aether so assiduously – and in a focussed, web 2.0 manner.

Share this Story
Previous: Notes From Walnut Tree Farm by Roger Deakin
Next: The Terminator (1984)