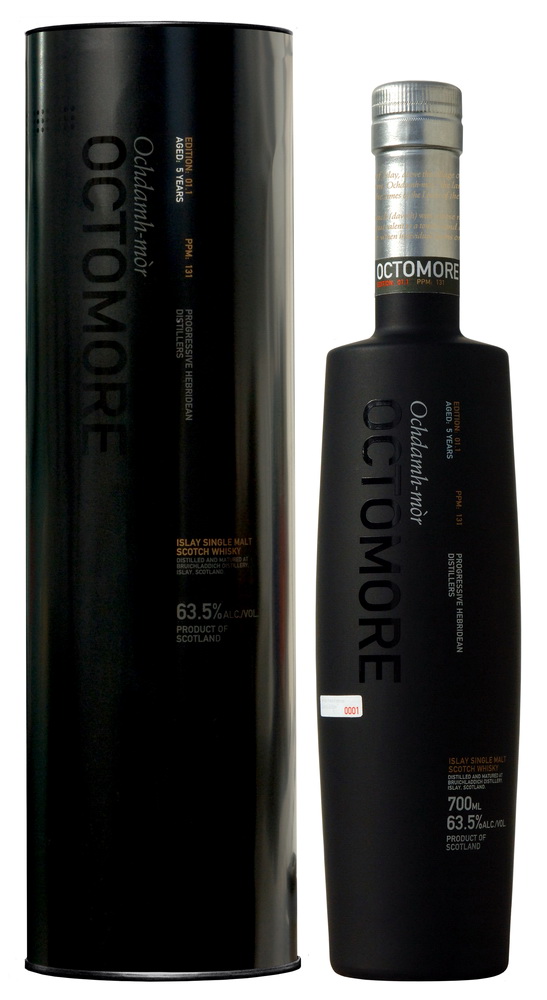 It was said at the time of release that the Bruichladdich Octomore 1.1 was the world’s peatiest whisky. The guys at Bruichladdich, one of the most experimental distilleries, have since surpassed that with later Octomore releases that have phenol levels of 140ppm. For context: the one I’m drinking is at 80ppm, an Ardbeg is about 54-56ppm and Laphroaig is about 35ppm.

Colour: light gold to straw, something deceptively mellow. On the nose: well, smoke, of course. Buttery, creaminess underneath. Sweet, charred fire. Bacon. Something earthy. A touch of lemon. Nothing that tells you it’s about to blow your head off.

In the mouth: Shit, but this has got some heat to it. It’s as if you’ve dipped your glass into a crofter’s fire and brought it to your mouth to drink the flames. The strength of this – an eye-watering 63.5% – combined with the amount of peat is beyond intense. This really is something else. Then, when you’re brave enough for a second attempt, there’s the faint promise of something syrupy mixed with overwhelming spice and afterwards you’re left with a warming, chewy maltiness.

This is, perhaps, one to drink on the coldest or stormiest night of the year. The Bruichladdich Octomore should come with a health and safety warning (but ignore that and drink it anyway).

Share this Story
Previous: Climate Change Statement
Next: Another Extract