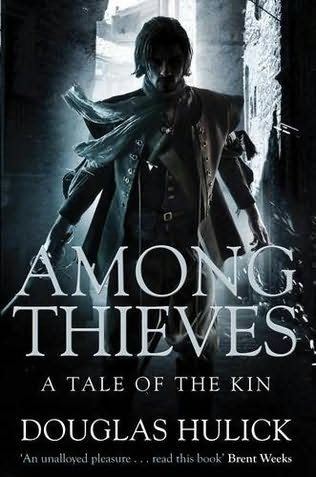 This year seems to be a big year of non-fiction for some reason, with the last two books I’ve opened being environmental ones. I read Dominion, which I reviewed for the Ecologist, and also The Death & Life of Monterey Bay, which was a fascinating ecological history of one region on the Californian coast. (Update: review online.)

But I did sneak in a fantasy book this month.

A while ago my editor Julie sent me Among Thieves, by Douglas Hulick. I rattled through it – and it’s actually a rather interesting book. It possesses all the style and plotting of vintage hard-boiled crime fiction. Not the kind of shit that pretends to be noir; there’s something raw and honest about the narrative. There’s a solid drive through the story from the not-entirely-likeable character of Drothe (and I mean that in a good way), a sort of assassin/thief/charming thug as he staggers through the city from plot point to another. Such labels as well as the cast could be open to cliché, but Hulick is smarter than that. (It’s nice, also, that the women aren’t all buxom wenches/vaguely concealed adolescent fantasy; they’re, you know, people.) The world-buidling and description is nicely minimal and done only when necessary, again much like in hard-boiled crime; there’s not much room for sentimentality here, either. Also, Drothe isn’t one of those ambiguous grey characters; he’s just a bastard with a personality.

For the in-depth review covering plot and whatnot, head over to the lovely people at Pornokitsch, because I pretty much agree with all of what they said word-for-word, and there seems no point in putting it on the Internet twice. It’s a rattling read, and is interesting because it seems to follow a different heritage than a lot of other fantasy novels. Certainly worth your time.