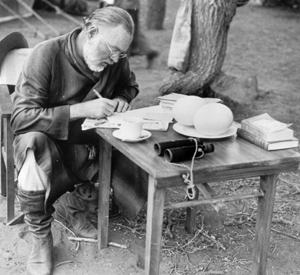 It’s probably not very fashionable to admit to liking Ernest Hemingway these days, but I felt partially inspired due to Damien G. Walter’s cheap analysis of him, which in all fairness was probably tongue in cheek (and I know Damien likes a good scrap anyway). There’s so much going on in Hemingway novels, but I can’t cover a fraction of it here. This is more of a nostalgic ramble.

I think he’s one of the great misunderstood writers – perhaps people believed the myth of him rather than actually read, engaged with and tried to understand his works. People probably don’t see beyond the ‘clipped’ sentences, but his prose was a significant leap forwards from the hangover of waffly Victorian sentences, something that is probably not really appreciated much these days (a sign of his impact). To be fair, it’s also a bit of a myth that he always wrote strictly clipped sentences – some were hundreds of words long. It’s not just the length of them, but the musculature, too, which fascinated me – his sentences were direct, forceful, strong. There are other dimensions: there’s that kind of underground misdirection of Katherine Mansfield; and also that kind of mantra-like repetition that D.H. Lawrence used. Hemingway’s prose basically reminds me of the artwork of Edward Hopper, which is shown well in his story “A Clean, Well-Lighted Place”:

They sat together at a table that was close against the wall near the door of the cafe and looked at the terrace where the tables were all empty except where the old man sat in the shadow of the leaves of the tree that moved slightly in the wind. A girl and a soldier went by in the street. The street light shone on the brass number on his collar. The girl wore no head covering and hurried beside him.

Anyway, tons has been written about Hemingway’s prose, so I’ll stop there. Just hit Google if you want to know more. His themes are varied, but generally touch on things like death (and suicide), isolation, and violence. It’s not masculine bull-shit, it’s just darkness from a man who has witnessed plenty during wartime (I don’t think any of us today will know what it means to be part of the lost generation). Hemingway has often been considered misogynistic in his life and writing, perhaps symptomatic of his troubled loves, and I’m certainly not going to argue with those interpretations; though other people suggest that women often dominate in his literature, sometimes because of their absence, it’s fair to say that by today’s standards things aren’t perfect (then again, most contemporary novels probably still aren’t).

But one of the main things I really appreciated, as an struggling writer, was the myth of Hemingway. (See Chuck Wendig.) The lifestyle and fame was something that inspired ambition when I started really taking writing seriously (ignoring your friends, explaining why you can’t go out because you need to write etc.). It was a ridiculous thing to attach to, a falsehood perpetuated by the man himself, and possibly to that point where no one – not even him – realised where the truth and the fiction separates. Sometimes it helps to believe it’s possible, if you know what I mean.

Looking back, I probably would not appreciate his fiction like I used to the first time around, in my early 20s. I went through a phase where I read all his output, biographies, criticism, selected letters, and so on. I believe it’s great to fall in love with a writer’s back catalogue and become engrossed by their art. It was a fascination that left me all the better, even if now I possess more wisdom with respect to certain aspects of his writing.

But then again, all writers have flaws – I suppose that’s what helps define their art over the years.