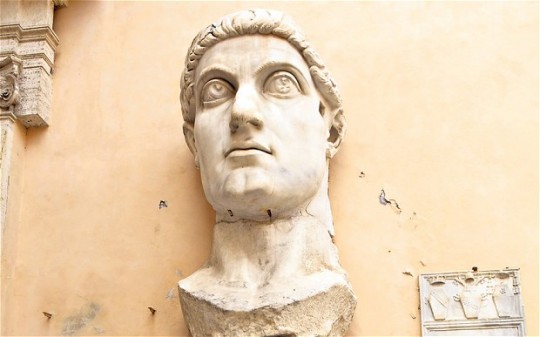 There’s a bit of a myth that the Romans didn’t really do art. At least, that’s what Alastair Sooke claims, in BBC4’s new series Treasures of Ancient Rome. The idea is that the Romans pinched what they could while taking over most of the known world, and basically rehashed what went before. They were good at blowing their own trumpet when it came to war and politics, but not so much art. Having read a few books on the subject, and visited exhibitions in the Metropolitan Museum of Art and the British Museum, I’m not all that sure the myth does exist. Even so, if you had no idea about the subject, at the end of this program you would at least have the understanding that the Romans were, in fact, pretty damn good at art. In fact, they revolutionised it – and that’s the more important point.

In his first programme, Sooke generally focusses on republican era art, from Capitoline Wolf, which turns out not to have come from that era at all, through to the development of portrait sculpture, reliefs from the age, and mosaics from Pompeii, all of which was spliced with scenes of Sooke scooting around Rome in a Fiat Cinquecento and generally being in awe of what he was looking at.

Seeing Roman art being recreated was incredible: bronze statues emerging from wax, paintings recreated from Pompeii, and a remarkable marble bust being chiselled in a studio. One of the things you never really get a sense for, when staring at pieces in galleries, is the sheer amount of effort, time, love, dedication and passion involved in their creation.

Much of this was to support Sooke’s views on how Romans changed the world of art, and he needed to show us the level of skill involved, and the technology developed to help drive art in new ways. Sooke explained that such changes brought us realism – on statues, that includes things like the detailing on beards, wrinkles, jowls, which all lead to a much rawer and honest portrayal of human emotion. That was a marked difference to what came before, and a true legacy of Roman art.

Sooke’s presentation style was different. It wasn’t as though he seemed awkward – I think he’s just a genuinely interesting chap, and not a cookie-cutter presenter who’s been wheeled out in front of a camera. His enthusiasm occasionally overwhelmed the subject, but that was brilliant to see. Roman art deserves such passion on the telly; it’s infectious. Sooke’s style worked for me because he was addressing the uninitiated, of course, and getting them excited; but it wasn’t patronising at all to those who have some understanding of the context. I think he’s honest: when confronted with a recreation of his own bust in bronze, he seemed genuinely humbled, unable to mask his emotions: not at the likeness of the piece, but more that he felt bronze heads were usually of more mature, and very dead, men.

I’ll look forward to the following shows, but for those of you who can’t access it, you can read Sooke’s article in the Telegraph discussing what he’s up to with this series.