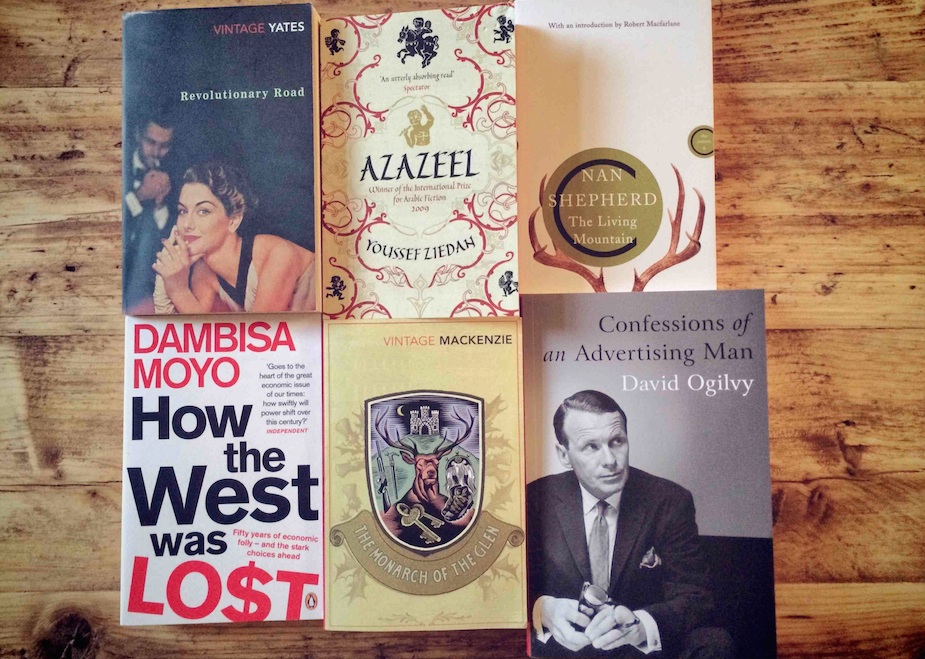 Over the past few weeks I’ve been reading some random titles; a bit of this, a bit of that – no one genre specifically. I’ve been trying to get to some authors from outside the UK and US, so picked up Azazeel by Youssef Ziedan, a fake memoir of a forgotten 5th century monk, after seeing it mentioned in this article on Arabic fiction. It caused a bit of a stir in the Arab world, but I think unless you have an appreciation for the intricacies of early Christian debates it won’t be as enjoyable. A ponderous book, at times enchanting and no doubt rich in theological references; but for the most part fairly meandering.

Nan Shepherd’s The Living Mountain is a classic of British nature writing, and this was a re-read for me. Potent, precise, fully of wonder. She’s a great writer. He prose is razor-sharp. The topography of the Cairngorms has surely never been better described. (Well worth reading what Robert Macfarlane has to say about the book.) Richard Yates’ Revolutionary Road – a classic of American fiction and portrait of American middle-class life falling apart – is achingly well-written, funny, full of aphorisms and horrific in equal measure. I really enjoyed every word of this, though felt utterly miserable by the end. Dambisa Moyo is a brilliant economist – How The West Was Lost is her excellent thesis on the transference of economic powers from West to East, with China taking advantage of our squandering of wealth. Confessions of an Advertising Man is David Ogilvy‘s classic of advertising and business, yet it’s remarkable to see how much of his simple wisdom still stands up today. It’s interesting from a technical writing perspective, too, though I’m not sure how much translates to novel writing. (And yes, I have been watching Mad Men.)

The best of the bunch, though? The Monarch of the Glen by Compton Mackenzie. Set in the made-up Scottish castle of Glenbogle, it’s a farce of the highest order involving a Scottish laird who goes by the name of Ben Nevis, and his war against the National Union of Hikers. That something this bonkers can be full of intelligence is a testament to Macnkenzie’s skill and nuance as a writer. It’s got very little to do with the TV show of the same name – I think that was ‘loosely inspired by’ at best – but this is a book everyone should read. Outrageously mad and politically charged – though ideologies clash in a way that seems to leave all viewpoints in an equally bonkers position. On reflection, I think a farce is probably the best way to treat politics in fiction.

Share this Story
Previous: Rimsky-Korsakov: Scheherazade, Op. 35 – The Tale of Prince Kalendar ( Lento-Allegro molto)
Next: The Death of Socrates by Jacques-Louis David