Genre labels just don’t apply here. With Nights of Villjamur Mark has managed to incorporate so many wonderfully varied ideas and themes into a decent blend of excitement and interest that the marketing department is going to have to invent a whole new section just for him. 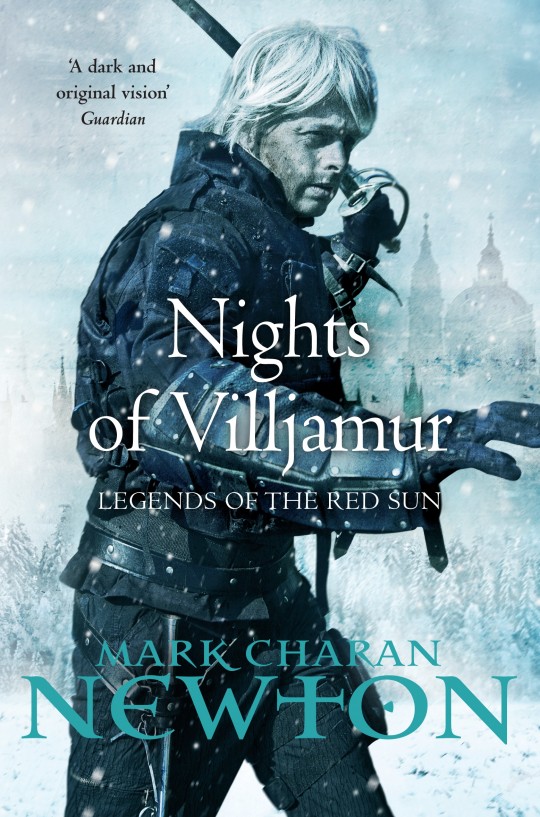 Beneath a dying red sun sits the proud and ancient city of Villjamur, capital of a mighty empire that now sits powerless against an encroaching ice age. As throngs of refugees gather outside the city gates, a fierce debate rages within the walls about the fate of these desperate souls. Then tragedy strikes—and the Emperor’s elder daughter, Jamur Rika, is summoned to serve as queen. Joined by her younger sister, Jamur Eir, the queen comes to sympathize with the hardships of the common people, thanks in part to her dashing teacher Randur Estevu, a man who is not what he seems.

Meanwhile, the grisly murder of a councillor draws the attention of Inspector Rumex Jeryd. Jeryd is a rumel, a species of nonhuman that can live for hundreds of years and shares the city with humans, birdlike garuda, and the eerie banshees whose forlorn cries herald death. Jeryd’s investigation will lead him into a web of corruption—and to an obscene conspiracy that threatens the lives of Rika and Eir, and the future of Villjamur itself.

But in the far north, where the drawn-out winter has already begun, an even greater threat appears, against which all the empire’s military and magical power may well prove useless—a threat from another world.

This is fantasy with vast scope and ambition… a complex, eldritch vision.