Posted by: Mark Newton in writing & publishing Comments Off on Amazon & Hachette

News in the book industry has pretty much been dominated by the latest round of Amazon versus the world. Remember when Amazon took away Macmillan’s books from their website? This time it’s the huge publisher Hachette that they’re fighting.

Amazon has a contract dispute with Hachette; as a result, the retailer has taken away pre-order buttons from Hachette authors’ books, screwing the writers in an effort to drive an ever-harder bargain. (Just to be clear, no one really knows what the trade terms are.) The New York Times takes a look at the man fighting Amazon as if he’s a war hero. James Patterson chimes in with “Amazon also, as you know, wants to control bookselling, book buying, and even book publishing, and that is a national tragedy” – especially so for Patterson, who is a book industry in his own right.

Some good things: Tor.com has announced that it is supporting those authors who are affected by the trade negotiations – a fine gesture of community spirit. Other booksellers have been announcing massive discounts on those affected titles, to tempt people away from Amazon. (From Amazon to Walmart!) But now, after a few weeks of all of this, Amazon is re-stocking certain titles, so maybe it will all end soon until it starts up with another publisher.

One wonders just how much Amazon have to do before people stop buying from them, but I guess it’s difficult when they’ve killed most of the competition. I think that’s what they call the free market, right?

Posted by: Mark Newton in environment & politics Comments Off on Earth’s Largest Rainforest

As a quick intro to this remarkable environment, it’s pretty good. 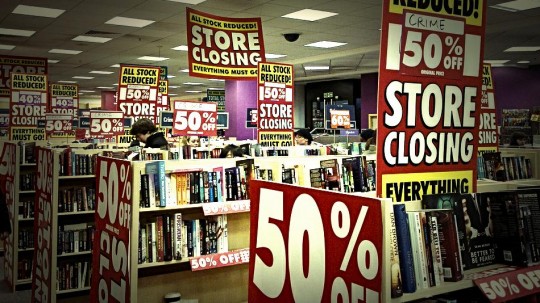 The New York Times asks if Amazon will kill of book publishers:

Well that’s clearly bollocks, as anyone in the genre will tell you, but I think there’s something to be said about Amazon’s clout in cutting out the middle man:

Publishers say Amazon is aggressively wooing some of their top authors. And the company is gnawing away at the services that publishers, critics and agents used to provide.

Several large publishers declined to speak on the record about Amazon’s efforts. “Publishers are terrified and don’t know what to do,” said Dennis Loy Johnson of Melville House, who is known for speaking his mind.

Publishers aren’t allowed to share what’s on the Amazon rate card (what they charge publishers to promote their books), but the costs run into the thousands for sending out customer emails, putting books in prominent places, and so on. Standard industry practice, of course. They charge publishers to do this because they can, and what’s the alternative? Let books die without exposure? Exactly.

And rates go up each year (times are tough, after all). The danger of this is that writers become less and less profitable for publishers – which means, when it comes to accountancy time, if the numbers don’t add up for said writer… You get the idea. But I suppose if Amazon are cutting out publishers, we don’t have to worry about the numbers game.

Amazon have long held the upper hand against bookstores, too: it’s much more cost-effective when you don’t have to pay for walls, staff etc, in quite the same way. They able to undercut publishers on price in the ebook business (some might say it devalues the physical product, though not quite as much as piracy and the expectation of books being free – but that’s another rant entirely). So with fewer bookstores, that means more people turn to Amazon. It means publishers will need to spend more money with Amazon, too.

Amazon are also cleverly seducing self-published authors into marching in time with the corporate giant, as it’s clearly far simpler to upload your work to Kindle then going through the hoops that traditional publishing presents. This is doubly clever because it means thousands of indie writers are all singing the praises of Amazon, and pointing people their way.

I’m not complaining about any of this – it’s all par for the course if you’re a company looking to dominate the writing and publishing industry, and I openly confess to buying most of my books through Amazon (even though I do love to browse a real bookstore). But I merely mean to highlight these points to suggest yes, I can see Amazon not quite killing off publishers in the next few years, but certainly marginalising the traditional industry beyond anything we’ve seen before.