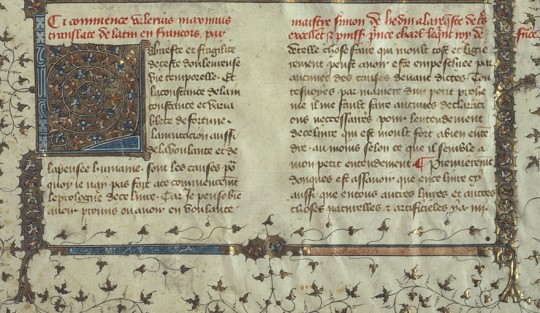 Over at the Metropolitan Museum of Art’s website, Wendy Stein, a researcher of Medieval manuscripts, reflects on writing and its history.

It’s very much worth a few moments of your time. I’m already missing that place.

Interaction & the limits of writing fiction

Before I stumbled into writing, music was my thing, ever since I was about six years old. I played various instruments over the years – keyboards, bass guitar, guitar, clarinet, and a weird spell on the french horn that didn’t last long. One of the things I loved about music – especially performing it at whatever level, even just in front of friends – was the joys of spontaneity. The kind of connection you get with an audience, mutually acknowledging a sweet note, or just seeing where improvisation leads you.

Writing doesn’t really do that. Writing is something that is done behind closed doors, showing few people until you’re ready; polishing, discussion, labouring the point, editing, proofing – and then, eventually, putting it in front of an audience. There’s a time lag of up to a year between the finished product leaving your hands and it appearing in someone else’s.

Writing doesn’t do spontaneity well. It doesn’t do improvisation. It doesn’t have that two-way interaction with an audience, and it’s one of my enduring frustrations with the art. The little creative thrills are limited to a good scene you just thought of, or a smart line that has you smiling, but even then, the instant sense of self-satisfaction is probably not a good thing (people can easily hear their own good riffs or bad notes, but not so much a good paragraph – one of the reasons terrible writers can’t always see that they’re terrible).

However, something I’m working on at the moment does kind of recapture some of this two-way ground. It brings writing into being a pseudo-performance (even though the delay until publication could be a year or so). I never like talking about unpublished things (because they could forever remain unpublished), but I’m really enjoying creating a plot that revolves around a locked-room mystery.

Becoming conscious – at a highly pedantic level – of deception, trickery, of showing the reader something that’s impossible, brings back that sense of interaction with an audience again, much more so than when I’m writing a standard plot. In fact, the audience is much more central to my thinking because of the locked-room mystery at the heart of matters. It’s not direct feedback from the audience, I’m kind of splitting my mind into thinking on behalf of the audience, but because of that new sense of pseudo-interaction, I haven’t had this much fun in years.

Where do ideas come from?

I found this bit of old footage where Rod Serling, screenwriter, novelist, television producer, known for The Twilight Zone, answers the perennial question of where ideas come from. He summarises:

Sometimes I’m amazed that this question gets asked so much. It’s one of the old clichés that writers talk about over the years, yet again and again, the question pops up in conversation. Few authors are really able to give an answer other than a shrug, which is perhaps telling. Serling’s response, generally vague and apparently nonsensical, is as decent as any that can be given.

I think if writers out there are struggling to come up with ideas – or struggling to understand where ideas may come from – then writing probably isn’t going to be a good way to earn a living. Ideas are the easy bit, as Serling says. Nearly everyone I meet has an idea for a book. It seems to be the writing it down part where people slip up.