Fund Your Own Writing Project

If you’re looking to get funding to write a book, one option is to use Kickstarter, which was pointed out to me in the comments of a previous post. 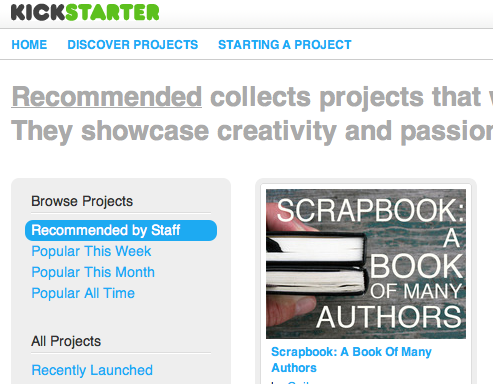 I’m sure by linking to this, it’s going to annoy the hell out of some writers – those who think we’ve a god-given right to be doing what we’re doing, that we’re somehow Very Important People. Me, well, I’m reminded of a Don DeLillo character, a writer, who said of himself:

I don’t think we’re special people any more than anyone else is – we’ve just worked hard, had the skills, but got lucky. There’s a whole bunch of people who probably work hard and have the skills, but luck wasn’t on their side. I can understand that.

This means I’m open-minded about who should and should not be a writer. It’s a fine line between success and failure, and for those who have fallen on the wrong side, perhaps Kickstarter is a good way to fund your project.

I would place this on the same level as self-publishing, which can split of into ‘good self-publishing’ (small-scale projects that publishers would never touch, such as the history of a local church – something that serves the community) and ‘bad self-publishing’ (vanity, I’ve been rejected a billion times but the world must – must – see what I write because I am a genius and all editors are just missing the point, and I will go into bookshops to annoy the hell out of every member of staff until they stock my book, and it’s all about me, me, me). It’s bad for that kind of person psychologically, perhaps, but more important financially – we should also give warnings against those companies who seduce desperate writers into parting with their cash in order to get published. ‘We’ll send your books to newspapers to be reviewed!’ they cry as you open your wallet and fold dollar notes down their low-cut publishing tops. Because they can say they will send out your book to reviewers, but without the support of a whole bunch of things (a publicist, a publisher with a trustworthy pedigree) it’s most likely going to end up going straight in someone’s bin.

So, perhaps Kickstarter bypasses the whole ‘parting with cash’ problem. It’s an advance paid for directly by the public – or rather, levels of donation in which the public buy in to your project, and you already get some idea of a level of interest. There are questions of ‘ownership’ raised, perhaps, and some may have entitlement issues. George R R Martin could totally be your bitch this time.

But I like the questions and self-examination that Kickstarter raises. Is there anything wrong with funding someone to write a book that you will be interested in? This funding means that – possibly – editorial services can be employed, a decent printer can be sourced. There is still a lot of hard work involved. What if a writer is talented, just not commercial enough? What if they’re writing in a niche of a niche, and the project would never be touched by the major publishing houses? What about supporting the Arts, darhlings?

And what about funding smaller projects run by ‘established’ authors – would that change your opinion? Things which we are mad enough to think of, crazy little ideas that not even the small presses think they can sell, but with a little self-funding, that established writer could commit the time.

There are some dubious projects already getting a lot of donations, and you have to question who exactly is donating money to have ‘a private reading in a public place’ for a book about sex.

It’s also worth asking that if it wasn’t literature we were talking about funding, would you still think the idea was a bad one?