The King Of Elfland’s Daughter 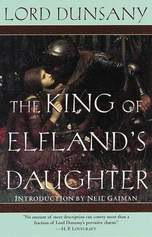 This isn’t a review, but the book deserves more attention that being rounded-up with another post. The King of Elfland’s Daughter, by Lord Dunsany, is a heck of a novel. There is much of the fairytale here, and I was reminded of the fantasies of William Morris. There’s something very ornate, something elegant about the aesthetic, and the prose, though at first densely structured in olde speak, is crafted in the same manner.

The story concerns proper magic and a country’s thirst for it. Because of the demands of his citizens, a king sends his son, Alveric, across “the fields we know” to find Elfland, in order to find and wed Lirazel, the King of Elfland’s daughter, and bring a spot of magic back to his own kingdom. Which Alveric does, pretty early on, and returns with her to find that some considerable time has passed.

It’s really the theme of time passing which runs deep throughout the novel – since time does not really pass in Elfland, it makes ageing and death so prominent and issue in our own world. (It’s something that crops up in Dunsany’s other stories, too.)

Much of modern fantasy literature is criticised for its use of magic as a way out of any tricky situation, like some fancy oh-so-useful weapon, but many writers could do worse than study how Dunsany has used it here, most of which doesn’t really become apparent until the end. It’s bound up in the setting and characters so well, influences motivation and outcomes, and reflects much deeper, primitive desires. I was impressed how well fantastical elements were used, and that in itself puts a lot of modern writers to shame – Dunsany is clearly proud to explore elements of the phantasmic.

As an aside, I very much noticed an influence on Neil Gaiman, and it came as no surprise that he wrote the introduction to this edition. So, well worth a read, and I shall certainly be reading more.

Share this Story
Previous: Gil Scott-Heron – “Me And The Devil”
Next: Bantam Spectra Proofs