It is a balmy summer’s evening and a crowd is gathering. China Miéville, Adam Nevill, myself, publicists and organisers, all head into Forbidden Planet and down the stairs, preparing ourselves for the signing.

China Miéville: I feel like there should be some kind of grand music on our arrival.

Me: What, like the kind of thing you get at a wrestling match?

CM: Absolutely. What song would you have playing as you head out for a signing?

Me: Um… I’ve never actually thought about it.

CM: Oh come on, surely you’ve got a song you’d want playing as you go out for these things?

CM: Oh you must have heard of it? [China begins to sing the main riff]

At this point I make an observation that I’m of a younger generation (as I will continue do until I am no longer the younger generation). Later, China whips out his iPhone to reveal the video. And here it is, in fact, the song that Three Clarkes Miéville would have playing, if authors were to walk out to music at signings.

I never got to find out what Adam’s music would be, but since he was going to Download, you can be sure it’s none of this Drum & Bass filth. And I still haven’t decided upon my own. More thought required.

The Forbidden Planet signing was, quite simply, a great event, and while I remember I should thank Danie Ware and the gang at FP, as well as Chloe Healy at Pan Mac, for making it such a splendid evening for myself, Adam and China. Here is a picture of me doing some actual, live signing, courtesy of the lovely Adele: 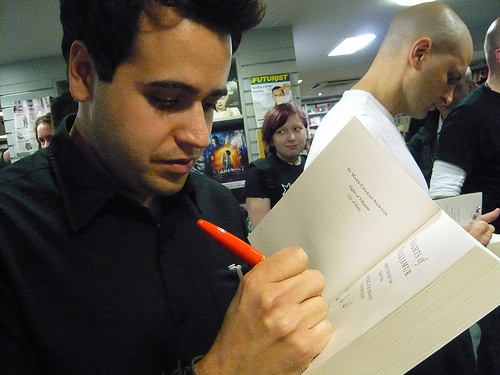 There was such a big crowd there, and a huge turn-out of bloggers, and given the open-plan nature of the day, it meant that many people could attack the authors from all sides. I signed solidly for the hour, met lots of very lovely people, signed their books, signed a monstrous pile of stock, then did a short video interview, which I failed to take seriously again. A lot of people were extremely kind about the blog, too, which makes typing into this little box a little more rewarding.

Afterwards, we all went to the Phoenix Club, and I enjoyed chatting properly – you know, in meatspace – to readers and bloggers. I’m not going to name everyone here, mainly because I’ve just got back and currently my memory will neglect someone. Oh, but Gav from Next Read, deserves a mention because he gave me a tarot reading on the night. There were several people who I didn’t get the chance to talk to for long enough (including Adam – top guy) but I’m sure the chance will come again in the near future. Other write-ups are materialising, and I’m sure there will be more very soon.

By the way, for those of you seeing me moan on Twitter, I finally managed to get copies of City of Ruin. While I’m at it, here is a very lovely review of the book.