They Do It With Whisky 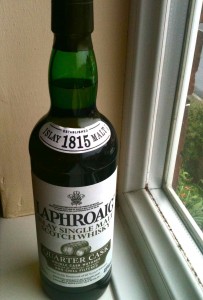 This arrived today, a lovely bottle of Laphroaig Quarter Cask, in celebration of publication, courtesy of the lovely Team Tor. How nice! None of this champagne nonsense – Julie Crisp is all about the hard stuff.

And now to business. Do you fancy getting your hands on a SIGNED ARC of the US edition of Nights of Villjamur? Do you? Well head over to the Scotsman: he’s giving one away.

And while we’re north of the border, here’s part one of an interview, which I actually think is my most interesting so far (perhaps because I’m not waffling on about my books specifically). We cover all sorts of topics, from blogging to bloggers to prose and the wider genre, and what I was delighted about was that I was put on the spot with a tough question or two:

Do you think bloggers perhaps find it easier to overlook a problem with your work than they would the work of someone who doesn’t trade Tweets with them, and indeed engage in the dialogue we spoke of before, because they’re afraid to jeopardise your interest?

Possibly. The same opportunities have existed for decades, for authors to be friends with reviewers, though at least the internet is more open about it. You see reviewers and authors mingling at conventions all the time. I like that Twitter and blogs are honest and open – these aren’t the unspoken liaisons in a hotel bar.

But I suspect this is something to deflect to reviewers – because the question is, are bloggers likely to let the fact that they know someone (albeit digitally, in most cases) interfere with their reviews? Would you let your relations with authors get in the way of what you had to say about a book? Only you can answer that. As an author, I’m just out there having fun.

There’s another interview in local arts mag LeftLion, courtesy of Adele, and this was also very fun one, where we talked in more detail about themes within City of Ruin.

You touch on tolerance issues in NoV but expand much more on that in CoR, you already mentioned sexuality and politics, but also racial tensions and without giving too much away also dramatically differing moral views and other weirder differences. Were these issues something you actively wanted to engage with or was it simply that they were right for the characters?

Absolutely I wanted to engage with them. Fantasy fiction doesn’t have to shy away from the real world. In fact, surely it’s more powerful if it engages with it? I don’t think all fantasy novels should just be only entertainment or what used to be called simple escapism. Entertainment is cool, the bare minimum. If you can engage with real world topics on top of that, if you can try to expand someone’s horizons with regards to tolerance, then that is certainly a good thing, and it might also raise levels of respect for the genre. All ambitious stuff, of course, and I’m sure many will always see fantasy as meaningless literature despite that, but I wanted to at least try.

And don’t forget to book your tickets for Alt.Fiction on Saturday.