How Do You Eat Yours?

From the Telegraph, on a food theme within Twilight:

What struck me most in the first book was the way that Edward – being an immortal vampire who feasts on blood – doesn’t eat any normal food. Meanwhile, he constantly encourages the heroine, Bella Swan, to eat and drink. This is the opposite of the experience of most teenage girls – and indeed many older women – who feel that they must eat sparingly, particularly in public, while they watch boys give free rein to their appetites.

On their first proper date, after Edward has thrillingly rescued Bella from a gang of attackers, he takes her to an Italian restaurant. ‘I’m not hungry,’ she says, shrugging. But he insists in a low voice, ‘full of authority’, that, ‘You should eat something.’ He watches her intently as she eats a plate of mushroom ravioli. He also encourages her to drink two full glasses of (non-diet) Coke. ‘”Drink,” he ordered.’ Bella sips ‘obediently’.
Throughout Twilight we see beautiful Edward worrying whether Bella has had enough food. In the school cafeteria he surveys the food and begs her to ‘take whatever you want’. All the while he eats nothing, hungry only for Bella.

For too many teenage girls this is a heady sort of wish fulfilment. One of the many aches of those years of hormones and exams is the gender gap that opens up around food. Suddenly, girls have curves and boys don’t. Boys – particularly the massive sports-playing kind – are praised for their manly appetites and encouraged to wolf down vast platefuls of carbs. Girls, meanwhile, unless they are unusually strong-minded and sane, start policing each other’s food intake. Are you really going to have that cake? OMG, do you know how many calories there are in a frappuccino?

A quick aside – I never realised he was a vegetarian vampire like this guy. 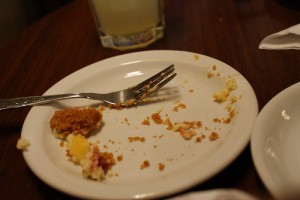 Ignoring generalisations – because this is the internet after all – I think discovering such matters within a text is interesting. Food and sexuality are both, at heart, activities of the senses. (A friend of mine once had this theory, which probably wasn’t their own, that if you wanted to know what someone was like in bed, then you should first watch how they ate a meal.) To see these notions linked in literature, which is very good at describing such sensual matters, and even connecting them, probably shouldn’t surprise me.

I wonder how apparent this is in other books, especially those with a heavy romance strand running through the text? Is there a trend in the romance genres, and is it even intentional, or something that spills out, as it were? Lots of ice cream being licked seductively? I confess I’ve not got the chops to really speak about that genre with any authority, and I’d love to know what someone else thought. And I wonder how much it is all, consciously or otherwise, connected to the notion of fantasy being wish fulfilment.

I’m trying to think of any other authors who I’ve read, who seem absolutely fascinated by food in their books, though without the suggestiveness. You know the ones – endless details of banquets, or in Robert Jordan’s case, drinking tea. I remember the one Robin Hobb book I read got a little herby at the start, but my memory is failing me now so I can’t remember the rest.

This is usually something that the writer does not realise, until someone points it out to them long after they can do anything about it, and for the most part it’s not linked thematically. But I love these little quirks that leak through, betraying some minor obsession.

Watch out for my next book, which will features strawberries, onions and prize-winning marrows from my garden.