Confessions Of An Eco Sinner (Not Quite A Review) 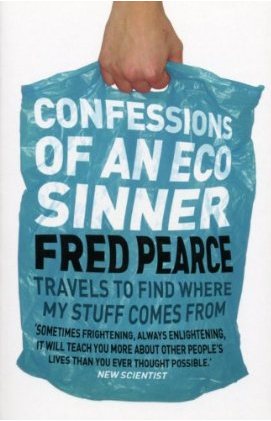 The neoliberal culture has led to our complete disconnection from the food we eat, or the clothes we wear. We merely consume, never thinking of where our goods come from, only that they’re in our hands.

With this in mind, Fred Pearce wanted to explore the paths of everyday items, the totems of every day life, from the gold in his wedding ring, to green beans, to our furniture, to the cotton from which his socks are made.

Without agenda, each territory is explored with gentle facts: a pint of mass market lager requires some 24,000 beer miles – transport of crops etc – whereas a pint of local ale requires 600 beer miles at best; Mauritania only abolished slavery in 1981, though it persisted much later than that; Britain is the second largest importer of illegal timber; an explanation of how the EU buys the rights of tropical fish stocks so that they may be strip-mined to the point of no return.

Around this, the harsh detail is built. He follows the ridiculous journey that, for example, our t-shirts take; from cotton farms in Uzbekistan, uncovering the appalling human rights abuses and child and/or slave labour and environmental destruction.

If I can put this simply, our obsession (yes, my obsession too) with ever cheaper jeans is not just helping to sustain the dreadful conditions in Bangladeshi sweatshops, it is also helping enslave the Uzbeks, desecrate their land and finish the emptying of the Aral sea.

Accounts of environmental degradation are dealt with in a very accessible way. Carbon footprints are mentioned here and there; it is shown how intense agriculture destroys the very land on which people depend; how the loss of mangroves creates coastal instability. But the focus is mostly on the people behind our products. Pearce shows the conditions in which people work to bring us our food and clothing (there are some horrendous factories, and where labour laws are poor and unions are weak, it’s barely above the level of slavery). Pearce explores the influence of business and governments in undermining the quality of life of individuals. All of this is done in a conversational style, a gentle “You know, I just wanted to find out where so-and-so came from, and this is what I saw.” It’s not preachy, it’s just a bunch of deeply sad, but occasionally uplifting observations.

The absence of any solutions is rather telling, perhaps, but there are some positive things we can do: yes, generally speaking it’s better to buy organic. Organic Indian cotton farmers are actually more profitable because they’re spending less on pesticides, plus their soil is of a significantly better quality, which means they need to use less water and put less of a strain on resources. Yes, buying Fairtrade products (when not done via major supermarket brands) provides a significantly better quality of life: better prices, more community projects, children with a hope of a future – there is no spin, it does what it’s meant to. Buying local is also a boon – the mileage some of our food takes from field to dinner plate is spectacular. I would like to have seen a more thorough investigation into the politics – how, for example, US and European agriculture subsidies undercut the poorest farmers in developing nations so that they are forced to buy from abroad and become dependent upon them. But perhaps that wouldn’t have sat well with the tone of simple observation.

The most telling thing about this book is that it has prompted me to review how I actually consume items. It’s made me think about where my food and clothes come from. The thing is, if more consumers changed their buying habits, if more consumers questioned companies on where their products were sourced and what they were doing to help promote a fairer existence for workers, then people’s lives in far corners of the world would improve. But that’s unlikely to happen, because as we wonder around the aisles of supermarkets, we do not look these workers in the eye, and we remain unmotivated to change our ways. The neoliberal culture lacks the human touch.

When the bottom line is profit (cheaper prices that customers demand), in the global economy, people lose out massively. It’s often mooted in defence that when we buy crops from foreign farmers, we’re helping them out with an income, and there certainly is some truth in that; but when a surge in our demand for, say, green beans forces women to work illegally long hours and travel home across a dangerous country on their own at night… well, you get the picture. These are the things the balance sheets neglect to observe. People we will never meet are worked to their limits in order to satisfy the whims of our bellies.

I urge everyone to read this book.