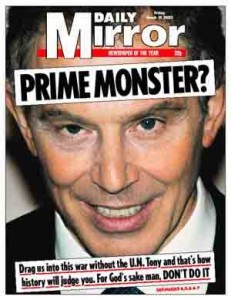 As reported in the Bookseller, Tony Blair has cancelled his latest book signing due to the threat of protests, such as those in Dublin last week:

“I have decided not to go ahead with the signing as I don’t want the public to be inconvenienced by the inevitable hassle caused by protestors. I know the Metropolitan Police would, as ever, have done a superb job in managing any disruption but I do not wish to impose an extra strain on police resources, simply for a book signing.”

Aw, the poor lamb. What a brave gesture. A strain on resources, you say? A hassle? Even a disruption? That’s awfully altruistic of you, Mr. Blair. 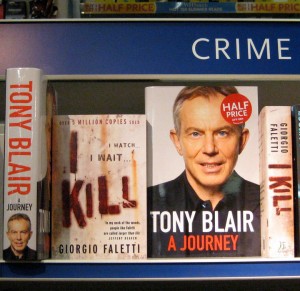 Still, if anyone fancy’s reading his memoirs, they might need to search more creatively:

“But a Facebook page was today inundated with pictures of the former prime minister’s book in odd places after thousands joined a group entitled “Subversively move Tony Blair’s memoirs to the crime section in bookshops“.

The Facebook page – which had more than 5,000 members by mid-afternoon – urges them to ‘make bookshops think twice about where they categorise our generations [sic] greatest war criminal’.”

Share this Story
Previous: A Catch-Up / Other Business
Next: Review Goodness & Title Spillage