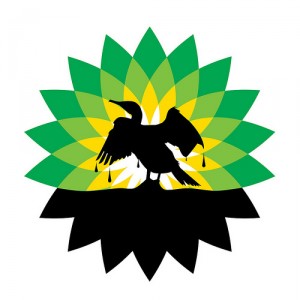 I kid you not, this is what is being reported:

BP, the energy giant responsible for the largest offshore oil spill in history, helped develop the state’s framework for teaching more than 6 million students about the environment.

Despite a mixed environmental record even before the Gulf of Mexico disaster, state officials included BP on the technical team for its soon-to-be-completed environmental education curriculum, which will be used in kindergarten through 12th-grade classes in more than 1,000 school districts statewide.

Environmental watchdogs and some experts who worked on the project said BP’s involvement is troubling given its handling of the Deepwater Horizon tragedy, which killed 11 workers and dumped more than 200 million gallons of oil into the Gulf of Mexico.

This Greenwashing was brought to you by the company who were forced to pay $22,000,000 when caught dumping hazardous wastes in Alaska. This is the company who incinerated 15 of its own workers and injured 170 others at Texas City. This is the company who were forced to pay “the largest criminal fine ever imposed against a company for violating the Clean Air Act”, and who, of course, caused the largest ever accidental oil leak, only to try and dump the blame on others. Which is ironic, considering that’s what it does with its waste.

I wonder what’s on the syllabus?

Share this Story
Previous: Interview With Tim Waterstone
Next: Third Stone From The Sun