Third Stone From The Sun 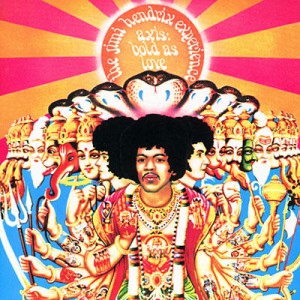 Jimi Hendrix was a fan of Science Fiction books:

Philip Jose Farmer’s Night of Light had a big influence on Hendrix. “Night of Light was a science fiction book that in 1966 inspired Jimi to eventually write ‘Purple Haze.’ Farmer’s story had to do with sunspots having a disorienting effect on a distant planet’s population. Jimi wrote pages and pages of lyrics for ‘Purple Haze,’ originally an epic tale of the history of warfare for the control of the planet Neptune,” he explained.

He added: “Producer Kim Fowley told us that when he met Jimi early in 1967 in the UK, Jimi had a trunk of books, all science fiction.”

Schreiber continued: “Jimi had been obsessed with science fiction as a boy in Seattle. He always went to see the actor Buster Crabbe in the serial Flash Gordon that played at the local theater. In fact, his nickname during youth was ‘Buster.’ Once, he literally jumped off the roof of his home, so taken was he with Flash’s ability to fly … One only need to pick up father Al Hendrix’s book, My Son Jimi, to see how much the boy Jimi drew and was obsessed by not only images of war and race cars but amazing planetscapes.”

In a way, it probably comes as no surprise, given some of the mad stuff Hendrix wrote and smoked, but it’s still cool to have high-profile stars being fans of genre. It’s the sort of thing that helps with perception. You know, if Celebrity X likes Science Fiction, it’s okay for man/woman/other-on-the-street to like Science Fiction. It’s cool.

Unless Celebrity X happens to be some bat-shit crazy douche-bag, or worse, someone like Gary Glitter. That just ain’t cool.

Are there any famous celebrities in the modern era who are fans of the genre?