SF Books That Got Away & Interview 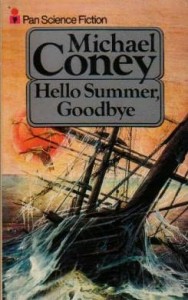 I know I’ve not talked too much about genre books recently. I guess I’ve been having a couple of months away from thinking about them and needed to get my head elsewhere, but I’m now suitably refreshed.

From The War of the Worlds to Nineteen Eighty-Four, some science fiction goes down in history. But what about the brilliant books that got away? We asked scientists and writers to nominate their lost sci-fi classics, and we’ve set a competition for flash fiction inspired by them – read on to find out more.

It’s an interesting little collection of novels. To their list, I’d probably add something by Michael Coney, who wrote top quality sociological SF, but never quite seemed to achieve huge recognition.

Now this, at From Bar to Bar, is probably the strangest interview I’ve ever done. I actually start answering questions about two thirds of the way through, and the rest is wonderfully bat-shit crazy.

I think what [the New Weird] movement helped do was define a darker and more surreal taxonomical branch of what is, by and large, a conservative genre – it’s a continuation of a line that stretches from William Hope Hodgson to Mervyn Peake to M John Harrison to China Miéville. I like to think that my work will sit on that side of the genre, which is something more obvious the further I get into my series, because those writers are the kinds who interest me the most.

Share this Story
Previous: “Nothing Is Real Anymore. Nothing Is As It Seems.”
Next: Nikka Whisky From The Barrel