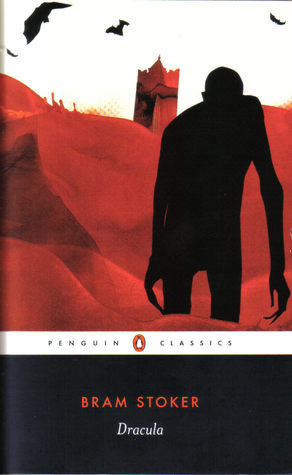 I read this many years ago, so long ago that perhaps I was too young to fully appreciate the psychological nuances of the text. And since today is also Bram Stoker’s birthday, a solid review seems an appropriate way to celebrate it.

Bram Stoker’s Dracula, published in 1897, is comprised mainly of diary entries and the odd newspaper report. It’s a fantastic structure for this piece of gothic horror, mainly because it allows Stoker to so perfectly show the reader varying points of view and more information than each of the individual characters can possibly know, as well as giving it a grounding in reality. It also generates incredible tension throughout the novel.

Dracula begins with perhaps the most famous and most regurgitated section of the novel (particularly in movie form): the diary of Jonathan Harker, a solicitor, who travels to Transylvania to meet up with Count Dracula in order to arrange real estate affairs back in England. Very soon, Dracula goes from gracious host to imprisoning Harker in his castle, and, through Harker’s observation and perseverance, we begin to see the night-time habits of Dracula, Harker’s intoxication with three female vampires and his eventual demise into some temporary mental illness.

This section of the novel is much smaller than one might think, given the more recent interpretations; and then the narrative skips to Whitby, a moody seaside town on the north east coast of England where, having worked his way through the crew of a ship, Dracula bounds onto English soil in the form of a black dog (which probably explains why the town is the location for a huge goth festival).The accompanying cargo contains boxes of earth from Transylvania, upon which the count intends to rely for sanctuary (and which later become targets for his demise).

Dracula is hunting down Harker’s fiancée, Mina Murray, and the 19-year-old Lucy Westenra, a friend with whom Mina corresponds (their letters taking up some of the narrative). We now are presented with Dr. John Seward, Quincey Morris and Arthur Holmwood (Lord Godalming, and to whom Lucy becomes enganged); much of the novel is made up of these individuals’ journal entries, letters, telegrams and so forth, and this medium provides simple descriptions of events and feelings at their rawest.

In Whitby, Dracula (being able to flap through the open window in the form of a bat) manages to bite Lucy, and she then commences her strange transformation (the reader does not yet know what to expect). It’s a slow, painful, emotional, horrendous process, whereupon Seward sends for Professor Abraham Van Helsing, to help study Lucy’s condition. Lord Godalming and the other men watch Lucy’s disintegration (she is young, beautiful, and about to be wed, and it becomes clear what an utter waste her life would be). Van Helsing, upon arrival, soon notices what the problem is: he places garlic flowers around her neck, seals the windows, states no one must enter, and commences with blood transfusions in order to keep her alive, at first using Arthur’s blood, then that of the other men – so they are quite literally giving part of themselves in order to keep her alive (it should also be mentioned that the two other men were also infatuated with her). Eventually, they fail, and Lucy dies.

What’s also interesting at this stage is that Dr. John Seward, who is in charge of an asylum, has a particularly fascinating patient, who tries to eat flies, spiders, cats, and other creatures; a wonderful mirror of Dracula’s own intentions, which also provides a spooky and useful analysis of the predatory nature of the count. There is some morbid curiousity at this fine line between sanity and madness; also, the nature of the patient being studied suggest that what Dracula is doing is very scientific. Given the Victorian age and the frontiers of science and rationality, I would think that it lent much sensibility and “truth” to the actions and biological effects of the count. And yet, as Stoker suggests in Chapter 14:

But there are things old and new which must not be contemplated by men’s eyes, because they know, or think they know, some things which other men have told them. Ah, it is the fault of our science that it wants to explain all, and if it explain not, then it says there is nothing to explain.

Once we have enough of the occurences given reason, the reader can have faith that there is truth in the Dracula myth.

Stoker then shows us newspaper reports of “the bloofer lady” (from what I can gather, this is a corruption/common slang for “beautiful lady”), taking children from the streets of London. The bloofer lady turns out to be Lucy, who is rising from her tomb at night to prey upon them. Van Helsing recognises what is going on and shows her actions to the rest of the aforementioned characters (who are now deeply connected to stopping the count).

[Van Helsing] looked up at me, and evidently saw the change in my face, for he said almost joyously, “Ah, you believe now?”

I answered, “Do not press me too hard all at once. I am willing to accept. How will you do this bloody work?”

“I shall cut off her head and fill her mouth with garlic, and I shall drive a stake through her body.”

It made me shudder to think of so mutilating the body of the woman whom I had loved. And yet the feeling was not so strong as I had expected. I was, in fact, beginning to shudder at the presence of this being, this UnDead, as Van Helsing called it, and to loathe it. Is it possible that love is all subjective, or all objective?

What follows (and indeed for much of the novel) is a tense chase across the country, from London to Exeter, and eventually back to Transylvania, in order to seek and destroy Count Dracula. We never really see the count for much of the narrative; like all great, psychological horror, the monster remains unseen. We learn about his actions and impact through reports and through Van Helsing’s discussions. His myth is reconstructed through their fears. Towards the final scenes, the sense of sheer desperation and of self-sacrifice is immense and weighty, and the last act (not at the hand of Van Helsing) comes as a relief.

In Dracula there are no ninja kicks, swooning teenage girls, sparkling vampires, cool catchphrases, emos or yearnings to be bitten by a vampire. Dracula is a cruel, sadistic monster, with no redeeming values other than a little charm. He generates an almighty fear, deep paranoia, and psychological breakdown in his victims, preying upon them with a relentless energy. Vampires, here, are nothing cuddly, nothing cool, nothing to fantasise about; yet they are not mindless, zombie-like fodder. As Van Helsing explains, in accented English:

[Dracula] is only stronger, and being stronger, have yet more power to work evil. This vampire which is amongst us is of himself so strong in person as twenty men, he is of cunning more than mortal, for his cunning be the growth of ages, he have still the aids of necromancy, which is, as his etymology imply, the divination by the dead, and all the dead that he can come nigh to are for him at command; he is brute, and more than brute; he is devil in callous, and the heart of him is not; he can, within his range, direct the elements, the storm, the fog, the thunder; he can command all the meaner things, the rat, and the owl, and the bat, the moth, and the fox, and the wolf, he can grow and become small; and he can at times vanish and come unknown. How then are we to begin our strike to destroy him?

Dracula is everything that the modern depiction of vampires is not.

This is precisely why it should be read.

Share this Story
Previous: The Beauty Of Data Visualization
Next: Things We (Authors) Get Wrong