The Haunting Of Hill House by Shirley Jackson 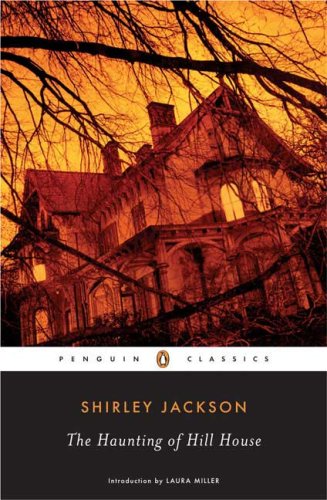 Before you go any further: spoilers.

You can file me safely in that category of people who wished things weren’t down to psychology, or eeriness. I’m one of those wishing the Big Horrible Creepy Thing turned out to be a Genuine Nasty Gribbly instead of human psychology / implied horrors – or then again, that could ruin the tension. Even the sort of weirdness you’d get in The House on the Borderland seems preferable in my mind, and generates a real fear. I found myself trying to explore why this might be, but I didn’t find a satisfactory answer.

Though, back to this novel: I love the mood, the suspense, the human interaction, the general teasing and cleverness of Shirley Jackson’s writing in The Haunting of Hill House. Over to wiki for the plot summary, kids:

Hill House is an eighty year-old mansion built by a man named Hugh Crain. The story concerns four main characters: Dr. John Montague, an investigator of the supernatural; two young women, Eleanor, who is shy, resents having lived as a recluse who cared dutifully for her demanding invalid mother for years, and Theodora; and a young man, Luke, the heir to Hill House, who is host to the others.

Things happen. Lots goes bump in the night. The events are given the ‘scientific’ treatment, in order to give the reader buy-in that this is ZOMG really happening. Jackson certainly has a deft way with characters, a soft and subtle touch, which is something to be admired. She creates a wonderfully evocative mood here, building up the layers of anticipation and dread. The gothic manor house – Hill House – is described wonderfully, in all its multi-dimensional glory, with a good deal of foreshadowing – and perhaps my problem was that it felt almost too calculated a description at times, something very much by the recipe book. I liked the fading away of Eleanor, her gradual disconnection from the group and her eventual madness, but sometimes you just want a weird monster to come along and sort things out.

So it’s a classic haunted house tale as an analysis of a young girl going steadily mad. I wasn’t hugely impressed, but then again I wasn’t disappointed either.