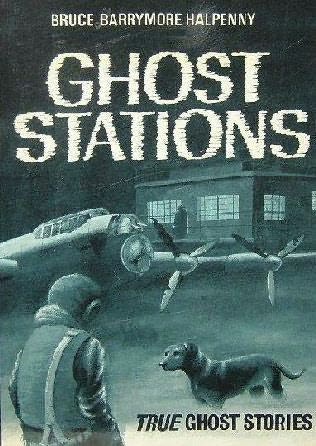 Probably my first encounter with supernatural stories as as child was though Bruce Barrymore Halpenny’s Ghost Stations books. They were collections of ghost tales from around the old WWII airfields (many of the buildings no longer required after the wall), or general tales of military related hauntings. The stories were gently evocative; nothing too hideous or weird. There was something very British and restrained about them all. I can’t remember many of the stories now, but the general gist of the books seemed to be more about the author’s relentless powers of persuasion – he genuinely wanted children to believe in ghosts. There was even a strange diagram at the back of one book: you had to stare at this drawing of a face for about a minute, then look elsewhere; you’d immediately see the optic echo of the image as a crude attempt at being able to see ghosts for yourself.

These books were made all the more potent as, for a few years, I lived near R.A.F. Coningsby, which held the Battle of Britain Memorial Flight, so we’d always have the famous Lancaster bomber and Spitfire flying over our house. (I remember the thunderous drone of the Lancaster as it would swoop over our back garden while we were playing football or cricket.) It constantly felt like living in the 1940s, even though it was the 1980s, and not that I knew what either was at the time. The landscape of the county was littered with things like Pill Boxes, crumbling or ruined former defence posts that were to be used should the country have been invaded. They’re still everywhere, these faded remnants of the war; I like to think they’re preserved by the British for sentimental reasons now.

Whatever the case, the landscape and these books certainly provided fertile ground for a kid’s imagination, an almost interactive set of stories – I could read about the ghosts and try to find them myself. I never did though, but it didn’t stop me trying.

Share this Story
Previous: City Of Ruin – US Cover Art
Next: Rebonjour