Here’s a nice little piece of SF memorabilia. Sometimes we writers would love to respond to critics, at length, and that’s exactly what SF author Robert Heinlein did . In the following letter, written in 1978, Heinlein discusses Heinlein in Dimension, which was a critical analysis of both him and his writing. He did not like it at all. 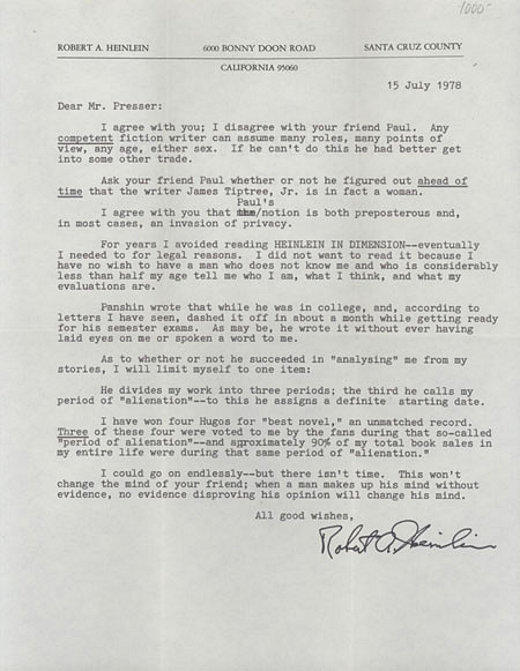 (Image from L.W. Currey. Following transcription courtesy of Letters of Note, which is a blog you really ought to follow):

I agree with you; I disagree with your friend Paul. Any competent fiction writer can assume many roles, many points of view, any age, either sex. If he can’t do this he had better get into some other trade.

Ask your friend Paul whether or not he figured out ahead of time that the writer James Tiptree, Jr. is in fact a woman.

I agree with you that Paul’s notion is both preposterous and, in most cases, an invasion of privacy.

For years I avoided reading HEINLEIN IN DIMENSION–eventually I needed to for legal reasons. I did not want to read it because I have no wish to have a man who does not know me and who is considerably less than half my age tell me who I am, what I think, and what my evaluations are.

Panshin wrote that while he was in college, and, according to letters I have seen, dashed it off in about a month while getting ready for his semester exams. As may be, he wrote it without ever having laid eyes on me or spoken a word to me.

As to whether or not he succeeded in “analysing” me from my stories, I will limit myself to one item:

He divides my work into three periods: the third he calls my period of “alienation”–to this he assigns a definite starting date.

I have won four Hugos for “best novel,” an unmatched record. Three of these four were voted to me by the fans during that so-called “period of alienation”–and approximately 90% of my total book sales in my entire life were during that same period of “alienation.”

I could go on endlessly–but there isn’t time. This won’t change the mind of your friend; when a man makes up his mind without evidence, no evidence disproving his opinion will change his mind.