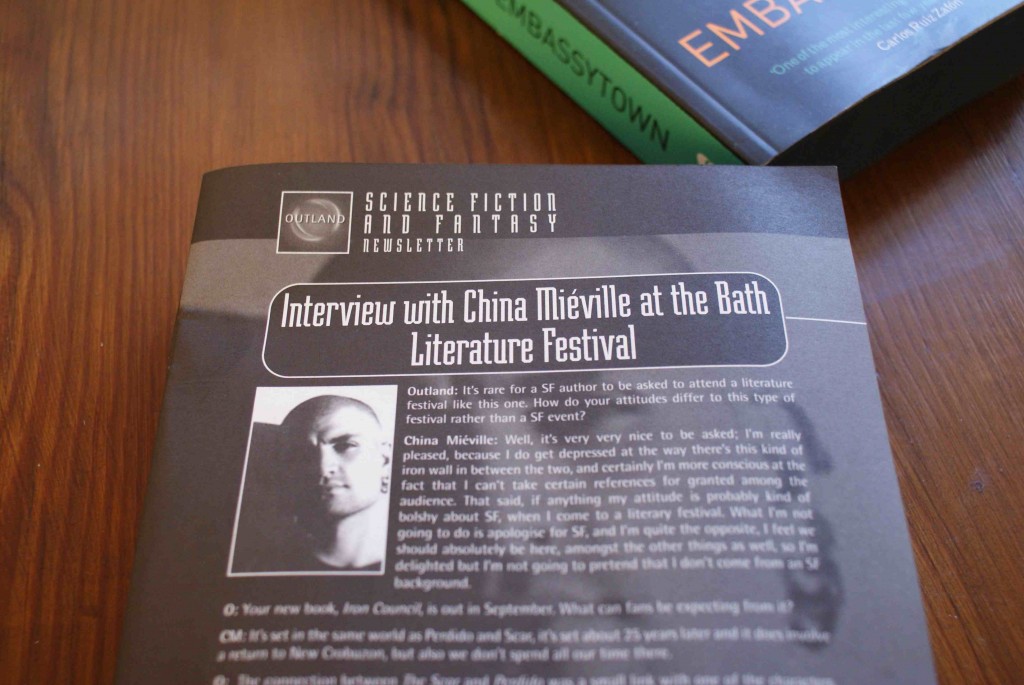 Back in 2004 I worked for the UK bookchain, Ottakar’s, which was later bought up by Waterstone’s in a somewhat evil takeover. At the time I looked after the store’s SF & Fantasy section, but I also contributed to Outland, their in-house, and quite nicely put together, Science Fiction and Fantasy magazine (pictured above next to some old book that was lying around). Many of you also know that I was somewhat of a fanboy of China Miéville and, seven years ago, I had the opportunity to interview him for the magazine while I was working at the Bath Literary Festival. These were the days when you had to contact the publicist for an interview, not simply fire off an email – and we even sat down with a Dictaphone to record this. (You bloggers have it so easy these days.)

So here’s an extract from that old interview, where we actually got onto the subject of the New Weird – back when it was something new and interesting.

China: Each thing has its own distinction, you know, they kind of rip off each other but they’re very much their own things too. The whole idea of this ‘new weird’, if it is anything – and that’s a big moot point – it is a notion of this slippage. This freeing up of generic interbreeding. A book like The Year of Our War, is a gritty, sexy, ornery, very strange, very funny fantasy, which is absolutely irredeemably fantastic, but also obeys none of the rules. If that’s not weird, I don’t know what is. Although it’s not necessarily exactly like my stuff of course I still don’t think that means it isn’t a part of what is going on. I think that what is going on is a sort of potentiality of the field – I think that’s the bottom line and that’s what unites my stuff, Mike Harrison , Steph Swainston’s, K.J. Bishop, Jeffery Ford and so on…

Mark: How do you see the ‘new weird’ as having progressed: it was seen as a renaissance of genre writing; how do you think things have evolved?

China: It was never a programmatic thing. What it was, was people noticing a certain type of writing being done and saying these things which seem very different have certain things in common. It’s about saying there’s a generation of writers, particularly in Britain but not reduced to it, ho have none of the nihilism of cyber punk, or not in the same way; who write within the generic tradition but with an excited disrespect for the boundaries of the generic tradition. It is a description and whether or not it continues to use the term ‘new weird’ depends entirely on whether or not I think it’s useful. I liked it because it struck me as pointing at writers like Alistair Reynolds, Steph Swainston, Mike Harrison, John Courtenay Grimwood, who are very different and saying ‘there’s something shared’. It’s very difficult to put your finger on exactly what, but once you’ve clocked that there is something shared, then the new weird goes some little tiny way to saying ‘this is what might be going on’.