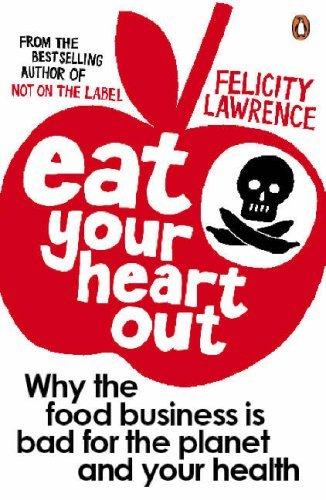 Felicity Lawrence’s Eat Your Heart Out is a fascinating little book, and another one of those important ones. This isn’t an attempt to scare people by revealing what’s in their food, but a look at the structure of the food industry and the impact on society and the environment (and, yes, a little look at the kinds of things we put in our bodies).

From an examination of milk to soya, to sugar to pork, to fats, and a final optimistic look at how things can get better. The general villain of the day is the hugely intensive agricultural corporations (not really a surprise) and big business/supermarkets (the inevitable shape of the capitalist food industry, as Raj Patel shows so eloquently in Stuffed and Starved) that puts profit before land and people.

It’s full of tidbits such as how deregulation of markets has crippled dairy farmers, and at how the biggest benefactors of the Common Agricultural Policy are not farmers (not even the disproportionately wealthy farmers who benefit with even greater subsidies) but giant, transnational food corporations, who get a rebate on the artificially high prices that subsidised agriculture brings. We’re subsidising the markets twice over, handing our EU payments to companies to produce high sugar, high fat, highly processed foods that health experts are telling us we should eat less of. There’s a whole lot of other shadowy stuff that goes on too. Anyway, it’s certainly a must-read for those who are genuinely interested in where their food comes from. For a more in-depth review see here. 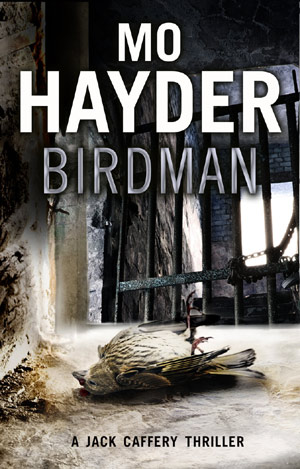 Mo Hayder’s Birdman is a tremendously grim book. I read this with an interest in the mechanism of crime fiction, the feints an deceits, the way crimes are committed and certain information is revealed, the whatever-it-is that makes a reader keep on turning, which is an art not often explored. Hayder does this splendidly; you can see the planning that’s gone into the novel, the research, the structure. The action is intense, and it’s actually a rather hard quality to sustain for such a long period of time. The plot skips from clue to threat, without sacrificing logic and entering bizarroland. It all makes perfect sense and, the further you get into the book, the more layers are revealed.

When people talk about gritty books, they seriously need to expand their reading horizons to someone like Hayder. This makes ‘gritty’ fiction seem like a village show cake sale. It’s a seriously intense work, and does not shy away from some of the most horrific qualities a human may possess. From necrophilia to rape (and not rape purely to make a book seem grown up, like you get so much in fiction today – “Hey, let’s include a rape to make things nasty” (and what is that all about anyway?). No, this is truly brutal, life-ruining, gut-wrenching horror.

I like Hayder’s style, too. It’s written with an eye to thrillers, of course – minimal, precise, direct, yet it’s also got a touch of the poetic that has clearly been restrained. Despite the bleakness, there’s just enough humanity to keep you going.

All in all, not one for the faint-hearted.

Share this Story
Previous: The Book of Transformations & Transgenderism
Next: Reviews & Stuff & Nonsense