On Sunday I went to Alt.Fiction. Though I only went to the one day (it was a weekender this year) it is by far and away the best British SF literary convention (I say literary – because the SFX Weekender, which I also love, is more about fun and solidarity than anything else!).

At Alt Fiction, the panels are actually about proper meaty topics, the whole thing is well organised, it’s not expensive to buy food and drink, and there is an ever-increasing number of authors and industry folk who come to gather on the day because they know it’s a good event to be at. The great thing about Alt.Fiction is that it’s about the craft as much as fandom, which other cons seem to forget sometimes, so it’s geared up with new writers and fans in mind. It’s all about the literature.

I was on a podcast in the morning called “Is genre just for boys?” with Graham McNeill, Jenni Hill and Jennifer Williams, which was splendid fun and we had a good bit of banter going back and forth. That should be online soon, actually, so those who missed it can have a listen. I’ll link to it when it’s up.

The panel at the end of the day was on “What’s next for genre?” with Dan Abnett, Alastair Reynolds and Simon Clarke. I was moderating this, and thought we managed to cover some pretty wide ground for such an ambiguous title – from recent trends, to things we’d like to see more of (and the likelihood of those wishes happening), all the way through to the Internet, how fandom has been changed by it and, finally, to ebook piracy, which we talked about very passionately.

Here’s a snap of me (looking very tired) with Alasitair Reynolds, after the panel. It was shamelessly taken from this album on Facebook. On that link there are more photos of the day, all of which were taken by Jyoti Mishr. 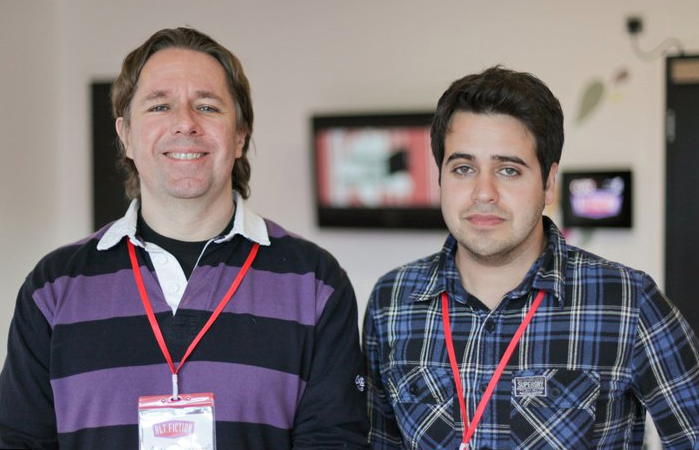 As usual, lots of splendid folk there, and I never got around to talking to everyone I wanted to, which is always the way.

In other news, City of Ruin was mentioned in the Book Smugglers’ LGBT recommended reading list (which was lovely); and the list is well worth investigating.