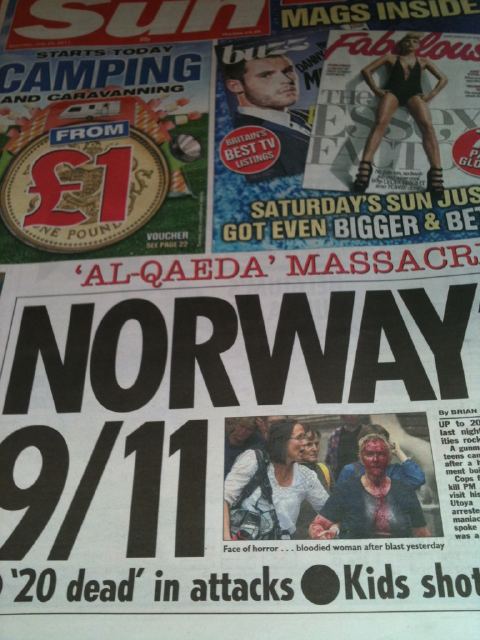 Note the red headline in The Sun, which appeared on Saturday, and you’ll note the kind of thing that contributes to our problematic culture: a knee-jerk reaction in which we publicise that all atrocious acts (and in this case, mind-bogglingly sickening) are conducted by those with brown skin despite not having a shred of evidence to support that initial statement (aka journalism).

As Charlie Brooker so wonderfully explains:

In the aftermath of the initial bombing, they proceeded to wrestle with the one key question: why do Muslims hate Norway? Luckily, the experts were on hand to expertly share their expert solutions to plug this apparent plot hole in the ongoing news narrative…

On Saturday morning I saw a Fox News anchor tell former US diplomat John Bolton that Norwegian police were saying this appeared to be an Oklahoma-style attack, then ask him how that squared with his earlier assessment that al-Qaida were involved. He was sceptical. It was still too early to leap to conclusions, he said. We should wait for all the facts before rushing to judgment. In other words: assume it’s the Muslims until it starts to look like it isn’t – at which point, continue to assume it’s them anyway.

Still failing to see this as an issue? Well, perhaps the eventual conclusion that position is to fall in line with this camp:

As the death toll rises in the wake of the rampage which left scores dead in Norway, details are emerging of killer Anders Breivik’s attempts to foster links with far-right groups across Europe — including the English Defence League.

The EDL have responded with sickening claims that Norwegian authorities are party to a conspiracy to disguise the actions of a Muslim or left-wing extremist.

In a series of posts, the administrator of the EDL’s official Facebook page for London members claims a “cover up by the left”, laying out supposed evidence for his conspiracy theory before asking “why didnt he blow the mosque up?” [sic]

What started out as a truly awful tragedy, which sees the death toll continue to rise, and in which the lives of many families are ruined, is going to have many ugly consequences. Fortunately, the Norwegian Prime Minster, has responded in a heartening manner:

Stoltenberg, who was due to address the youth meeting today, has responded by calling for “more democracy, more openness to show that we will not be stopped by this kind of violence”. No calls for revenge, no overblown rhetoric, just a quiet determination that this proud, egalitarian nation will go on as before.