This one’s a local gig: I’m going to be at the Walk Cafe Book Club, in Nottingham, on Thursday February 24th, at 6.30pm. I’ll be reading something (don’t know what yet) and converting some outsiders to the genre, and generally trying not to salivate at the cake on display.

If you’re in the area, why not stop by? If you don’t like me, you can at least enjoy the cake.

I’ve done a couple of interviews recently. The first is with Stefan at Civilian Reader, where I talk about writing, whisky and other stuff:

What was your first foray into writing, and what do you think of it now, looking back?

Oh, man, it was a pile of crap, a kind of ultra-new-weird desert-based thriller. But, you know, you need to get the crap writing out of the way before you go get to the slightly better stuff. I’m not ashamed of it – it was a first effort, and you need to practice and build up your confidence.

Stefan also reviewed and very much enjoyed City of Ruin:

City of Ruin is intelligent, thoughtful, and elegantly brutal. Newton doesn’t shy away from difficult or uncomfortable subjects. On the strength of this novel, I would say that The Book of Transformations (publishing in June 2011) has shot way up on my list of anticipated, must-read novels of 2011

And there’s another interview over at Ranting Dragon, which I thought I mentioned a while back, but obviously did not:

You and fellow author and Twitter aficionado, Sam Sykes of Tome of the Undergates, do battle. What is your choice of arena and weapon?

For the arena: a 1930s cocktail bar on the 43rd floor of a hotel, for sheer style points. My weapon of choice would be an attractive young lady—Sam’s got a weak spot for the ladies, so while he’s busy picking his jaw up off the floor, a couple of quick jabs should finish him off easily. BOOM!

I said to Julie that I would send cake to Tor UK in order to celebrate the new novel deal for books three and four, and I am a man of my word. I recommend writers sending a cupcake with every submission to a publisher. Cake makes them happy. 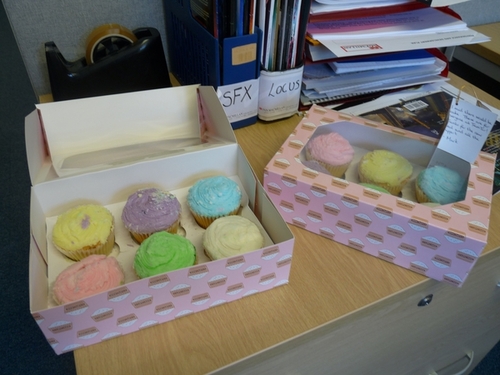