A Note On Focus

Remember when I said I was splitting up blogs, one to focus on the environment and political ranting, this one to be retained for more writerly ranting?

Here are the monthly stats (which I grabbed with one day to go in January) to show you what I mean, and to prove that my conclusions are science fact: 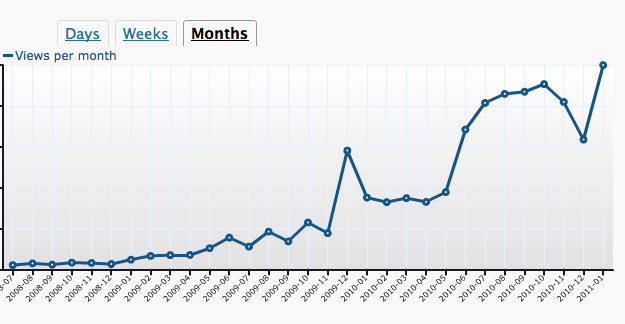 Forgetting the little spike in the middle (which was the infamous Why SF is dying post) there has been a nice, steady upward trend ever since this blog had been switched on. You can see the little leaps when the books were published in the UK and the US, but, generally, I’ve talked about writing and books with just a little variation, and built up a decent audience (you horrible lot) over that time.

Then I started talking heavily about politics and the environment, to the extent that there was a significant drop-off in this blog’s readership (and sure, one of those two months was December, which might have had something to do with it), but I was rather surprised. And for January, after I split my blogs and went back to talking mostly about writing and books on this one, as you can see, the upward trend has continued.

Conclusions? SF and Fantasy readers, at least, are by and large uninterested in what I have to say about politics (which means I can be chuffed about splitting off the blogs). I’d say to any freshly minted authors out there that, with so much white noise online, you need to be pretty focussed if you want to build an audience (which, let’s be honest, is the point of this site in the first place). These things aren’t black and white, of course, and I’m speaking in general terms – but if the non-book stuff takes over, then be prepared for a decreasing readership. Leave the soapbox for another blog (which I’d actually recommend – because it allows you to build two audiences, with a little patience).

Share this Story
Previous: A Shadow In Summer by Daniel Abraham
Next: The British Superhero Invasion