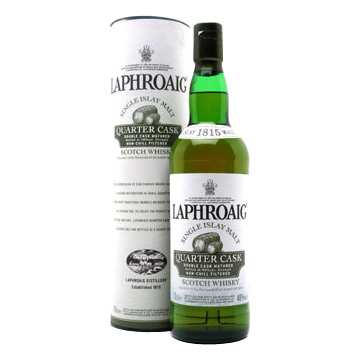 Some pub trivia to kick things off. The little island of Islay is home to several distilleries (many of which are eco-friendly). Islay’s soil is composed largely of peat. During whisky production, peat, when burned at the barley-drying stage, gives an immense amount of smokey flavour to the barley. It is ultimately what makes the whisky taste of campfires and cigars, and most, if not all, distilleries on Islay use large amounts of peat in their production, which is why bottles of whisky from Islay possess such a unique taste.

Laphroaig is one of the more well-known distilleries on the island, and the Laphroaig Quarter Cask is an attempt to distill a whisky that tastes like it would have done 200 years ago – it does this by using smaller barrels as per the 18th century (when whisky was transported by packhorse). The theory is that with smaller barrels there is more contact between the wood and the whisky during the maturation process, which very quickly gives the whisky its flavour.

If you’re still reading now, thank you for sticking with me.

So then, on to the whisky itself. It smells, as you would expect, like a fireplace. A gently roaring wood-burning stove, to be precise. Damp earth. Charred wood. Something sweeter, fruitier. On the tongue the sweetness hits you and it’s not as smoky as you might first fear; you can really taste the malted barley now. The second sip and that sweetness takes a grip: there’s a burnt caramel edge to it. A smokey, blood-orange marmalade, and with less of a medicinal, iodine note than the Laphroaig 10. This is young and isn’t too complex. It’s got a decent weight in the mouth, though doesn’t linger too long afterwards – you’re just left with taste of smoke and spice. If this isn’t escapism, I don’t know what is.

Drink this, close your eyes. I challenge you not to dream of the rugged coast of Islay.